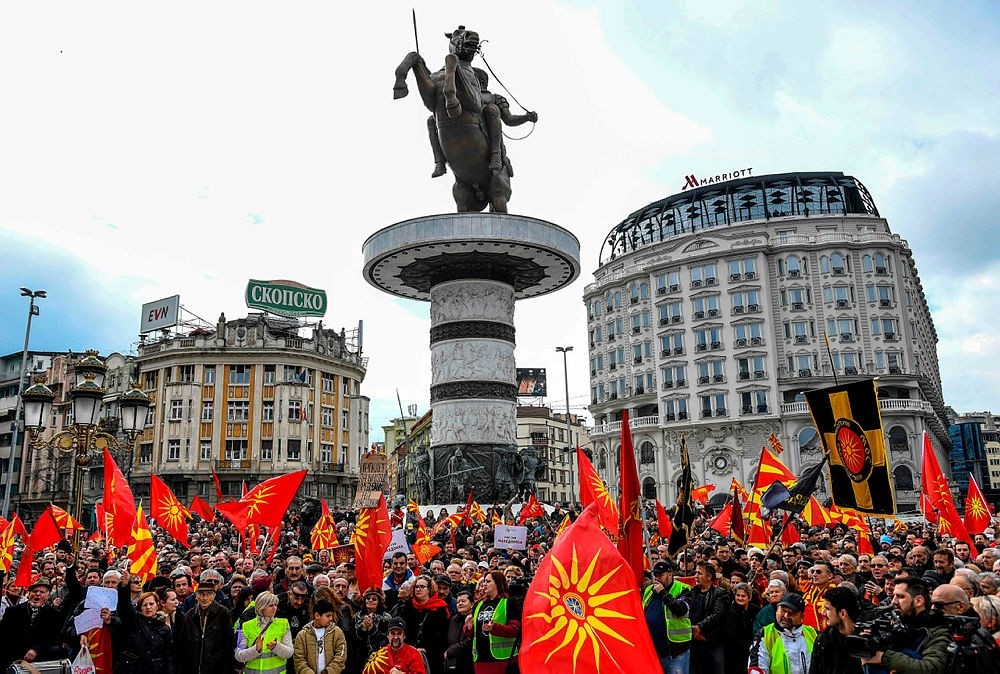 Thousands of flag-waving protestors in the Macedonian capital on Sunday chanted "We are Macedonians" at a rally to protest a possible change to the name of the former Yugoslav republic to comply with a demand by Greece.

The protestors organized by the We are Macedonia movement gathered under the statue of Hellenic ruler Alexander the Great in Skopje's main square.

"We are here because questions about the name, the identity, the constitution (and) language are issues over which we must adopt a (strong) position," Evica Stojanova-Kamberova, one of rally organizers told the crowd.

The small republic and its southern neighbor Greece have agreed to step up U.N.-brokered negotiations this year to solve a decades-old dispute that has hampered Skopje's ambition to join NATO and the European Union.

Protesters demanded that the government of Prime Minister Zoran Zaev halt talks with Greece over the name dispute. They also want a resolution to the United Nations demanding the country's recognition under its constitutional name Macedonia.

They also accused the government and the main opposition nationalist VMRO-DPMNE party of betraying the national interest.

Greece objects to the country's use of the name Macedonia, arguing it implies territorial claims over its own northern region of the same name.

After it split from the former Yugoslavia in 1991, Macedonia was admitted into the United Nations in 1993 under the name Former Yugoslav Republic of Macedonia (FYROM).

Last month, Zaev said Macedonia is looking at four options to settle the dispute with Greece that would include a geographical 'qualifier' to ensure there is a differentiation in the two names.

Media reports showed parallel rallies staged by Macedonians abroad in other cities including Washington and Sydney, Australia, where Greek flag and Zaev's photo were set ablaze.