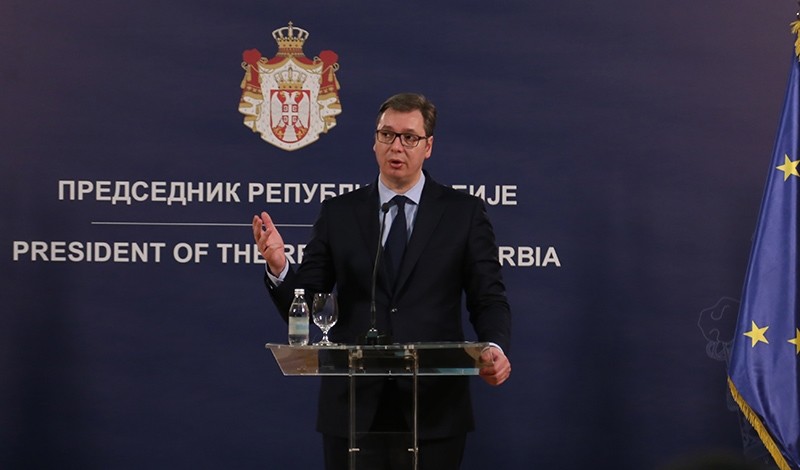 Serbian President Aleksandar Vucic said Wednesday that his country is ready for a compromise over Kosovo since resolving a dispute with its former province is key to its European Union bid.

Serbia has refused to recognize Kosovo's independence, declared unilaterally a decade ago.

Brussels insists that normalization of ties between the former foes, who fought each other in a 1990s war, is a key condition they both must meet in order to join the EU.

"For us, the most difficult hurdle on the European path is indeed the situation over Kosovo and that is why Serbia is .... ready to talk about possible compromises," Vucic told reporters.

He spoke after meeting with Wess Mitchell, U.S. Assistant Secretary of State for European and Eurasian Affairs.

Mitchell is on a tour of the region that has already taken him to Kosovo and Macedonia.

Mitchell urged the Balkan nations to take the opportunity to resolve the remaining disputes with Western help, including the EU's renewed commitment to accept new members from the region in the future.

"That is a job for all of us," the U.S. official said. "Now is the time to work together to solve these problems for the benefit of future generations."

"We can accept only a compromise ... but not a humiliation of our own people," Vucic said following talks with Mitchell.

Elected last year, Vucic, once an ultranationalist and close ally of the Serbian strongman Slobodan Milosevic — has become a staunch pro-European liberal who hopes to bring Serbia into the EU.

As he was sworn in May last year, Vucic urged an "internal dialogue" over the politically sensitive issue.

Although about 115 countries have recognized Kosovo's independence over the past 10 years, Serbia and dozens of other states, including its ally Russia, have not.

Serbia and mostly ethnic Albanian Kosovo have had difficult relations ever since the 1998-99 conflict, which claimed some 13,000 lives.

It ended after NATO launched a bombing campaign to oust Serbian forces from Kosovo.

Today Kosovo is home to some 120,000 ethnic Serbs, which is an estimate because they refuse to take part in a census.

Serbs consider Kosovo the cradle of their history and Orthodox faith.

Belgrade and Pristina recently relaunched a low-level, EU-sponsored dialogue on normalizing ties, first begun in 2011, after two years of deadlock.

Last month the EU unveiled a new eastward expansion strategy, presenting the prospect of membership as an incentive for reforms in the volatile Balkans region.

Serbia and Montenegro are favorites to become the bloc's next members, possibly by 2025.