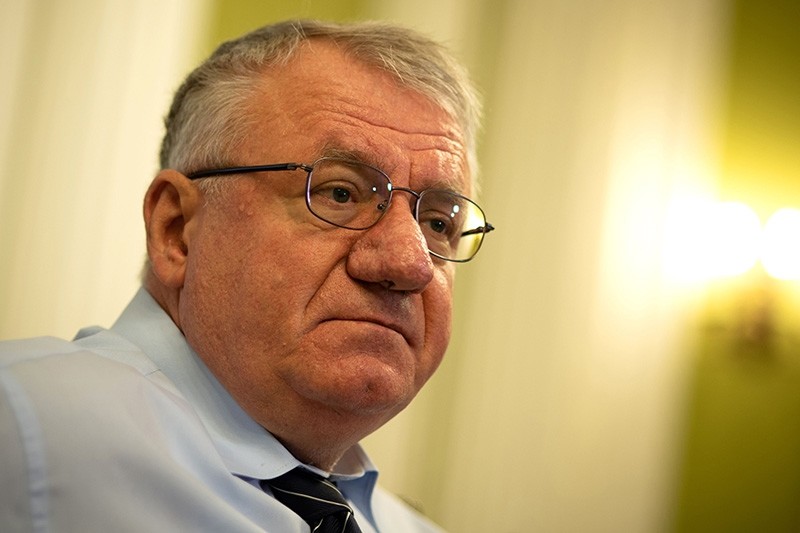 In this photograph taken on March 29, 2018, Serbian Radical Party leader, Vojislav Seselj speaks during an interview with AFP in Belgrade. (AFP Photo)
by Associated Press Apr 11, 2018 12:00 am

A United Nations war crimes court on Wednesday sentenced a Serbian ultranationalist to 10 years in prison, partially overturning his acquittal over crimes against humanity and other charges dating to the Balkan wars in the 1990s.

Vojislav Seselj, who leads the Serbian Radical Party and is a lawmaker in the Serbian parliament, was acquitted in 2016 of nine war crimes and crimes against humanity charges because of insufficient evidence.

Because he had already spent nearly 12 years in tribunal custody since surrendering in 2003, Wednesday's sentencing in The Hague, the Netherlands, had no practical impact on him.

Seselj told The Associated Press just prior to the reading of the verdict that "I don't care about the ruling. Now I'll go and have a siesta." Afterward, he told the AP the ruling was "illegal," adding that he was "proud of all the war crimes and crimes against humanity that were attributed to me, and I am ready to repeat them in the future."

Prosecutors accused him of crimes including persecution, murder and torture and had demanded a 28-year sentence for his support of Serb paramilitaries during the bloody wars in Croatia and Bosnia.

The far-right leader won notoriety for rhetoric that incited ethnic hatred among the ex-Yugoslav nations. In one of his speeches to his supporters during the war, he had called for eyes of Croats to be gouged out.

The prosecution had said that acquitting Seselj would have damaged the legacy of the war crimes tribunal for the former Yugoslavia.

Seselj surrendered to the court in The Hague in February 2003. He was released late in 2014 on compassionate grounds due to ill health, and continued with his ultranationalist stand in the Serbian parliament.

"Seselj's sentence has been served in view of the credit that shall be given for his detention," Meron said.

Wednesday's sentence centered on one speech Seselj gave in the Serbian village of Hrtkovci close to the Croatian border on May 6, 1992, which resulted in dozens of ethnic Croats being deported.

Seselj said judges "lied that there were systematic attacks" on Croats in Serbia.

Amnesty International Europe Director Gauri van Gulik called the ruling "a welcome development which delivers long-delayed justice to thousands of victims of the armed conflicts in the former Yugoslavia."

The appeals court did not fully overturn Seselj 2016 acquittal, but Van Gulik said Wednesday's decision showed "there was indeed a 'widespread or systematic attack against the non-Serbian civilian population in Croatia and Bosnia and Herzegovina'."