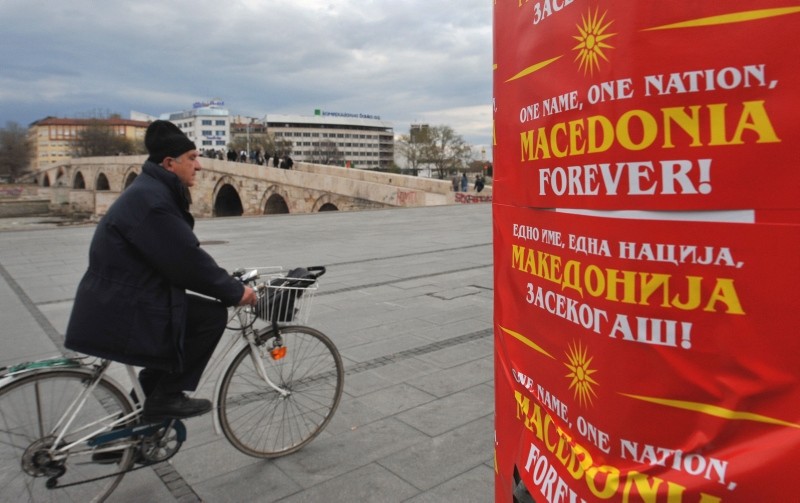 This March 27, 2008 file photo shows a man passing by a panel with placards, saying ,One name, one nation, Macedonia forever, and adorned with the original flag of the Republic of Macedonia in Skopje, Macedonia. (AFP Photo)
by Daily Sabah with Agencies Jun 13, 2018 12:00 am

A deal reached between Greece and Macedonia to end a decadeslong dispute over the latter's name is being criticized by the opposition in both countries.

The head of Greece's main opposition party described the deal as "deeply problematic."

Conservative New Democracy party head Kyriakos Mitsotakis called on Greece's president to intervene so the deal can be debated in parliament before it is signed, instead of after. The agreement, under which Macedonia will change its name to Republic of North Macedonia, is expected to be signed this weekend.

Main Macedonian opposition party VMRO-DPMNE also criticized the agreement, saying its leader Hristijan Mickoski calling it a "fake victory" for the country. According to Mickoski, Zaev "capitulated" to Greece.

Macedonia's President Gjorge Ivanov, who is close to the nationalist VMRO-DPMNE party which was defeated by Zaev in elections last year, has also signaled his concern.

The deal still needs to be approved by the Macedonian parliament and pass a referendum there, as well as ratification in the Greek parliament.

The name dispute has poisoned the two countries' relations since Macedonia gained independence from Yugoslavia in 1991. Greece wanted its northern neighbor to change its name, saying the term "Macedonia" implies a claim on the territory and ancient heritage of Greece's province of the same name.