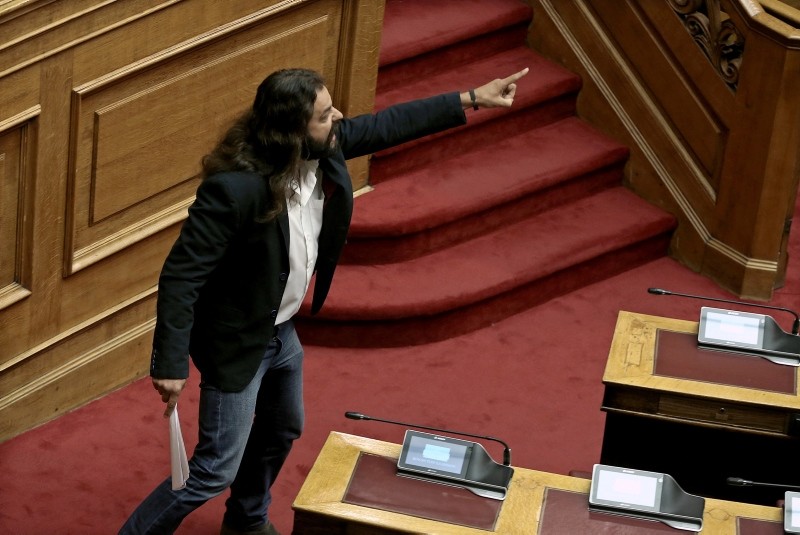 Golden Dawn lawmaker Constantinos Barbaroussis argues with lawmakers during a debate in the Greek parliament in Athens, Greece, June 15, 2018. (EPA Photo)
by Jun 18, 2018 12:00 am

Greece on Monday arrested a neo-Nazi lawmaker who was fleeing treason accusations for his outspoken stance against a contested name agreement with neighboring Macedonia, police said.

Constantinos Barbaroussis has been charged with committing preparatory acts for high treason over his exhortations last week for the armed forces to arrest the country's leadership in a speech he made in parliament about an agreement to allow Greece's northern neighbor to be called North Macedonia.

He called for the army to arrest Greece's president, prime minister and defense minister and to "carry their heads" to the Macedonian border.

A police source said he was arrested at the home of a friend in the Athens suburbs where he had fled on Friday.

Barbaroussis was elected with the Nazi-inspired Golden Dawn party. It evicted him for his comments made Friday in parliament during a debate linked with the Macedonia deal.

The name of the former Yugoslav state of Macedonia has been disputed for years.

Greeks say calling it Macedonia implies a claim over a region of the same name in northern Greece.

Golden Dawn leaders have been on trial for more than two years accused of running a criminal organization linked to political and xenophobic violence.