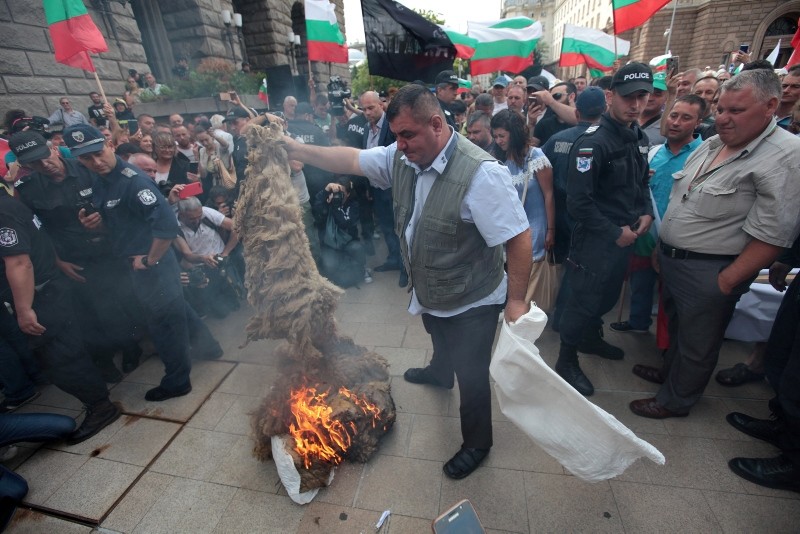 A protester burns wool during a rally against the government-ordered mass slaughter of sheep and goats following the first outbreak in the EU of the highly contagious Peste des Petits Ruminants (PPR) in Sofia, Bulgaria, July 18, 2018. (Reuters Photo)
by Compiled from Wire Services
Jul 20, 2018 12:00 am

Bulgaria reported on Thursday another case of the highly contagious Peste des Petits Ruminants (PPR) close to the border with Turkey.

The virus, which can infect up to 90 percent of an animal heard but does not infect humans, was found in the small town of Bolyarovo, located between the cities of Yambol and Burgas, the Bulgarian food and safety agency said.

It was found in a flock, owned by a relative of a farmer in a village where an outbreak was previously found, it added. It imposed a quarantine zone around Bolyarovo and ordered blood checks on small livestock in a 10 km radius.

Hundreds of farmers from around Bulgaria protested in the capital Sofia on Wednesday against the government-ordered mass slaughter of livestock following the first outbreak in the European Union of the highly contagious disease, also known as ovine rinderpest or sheep and goat plague.

Angry farmers, demanding the ouster of the country's agriculture minister and related directors in the ministry, tried to force their way in to the cabinet building, only to be prevented by security forces.

Farmers say that the compensation paid for each slaughtered animal is low and authorities failed to take necessary precautions.

Bulgarians also expressed outrage on social networks, saying the situation could have been dealt with through quarantining. It has also been alleged that in some cases, the culling took place before laboratory test results.

A few hours after the protests Prime Minister Boyko Borisov sacked Deputy Agriculture Minister Tsvetan Dimitrov and several other officials in the ministry over the handling of the outbreak.

Authorities have already slaughtered more than 4,000 animals in order to prevent the further spread of the disease and avert a European Union ban on Bulgarian milk and dairy exports.

Interior Minister Valentin Radev announced that slaughters will resume Friday and the number of security forces in farms plagued with the outbreak will be increased.