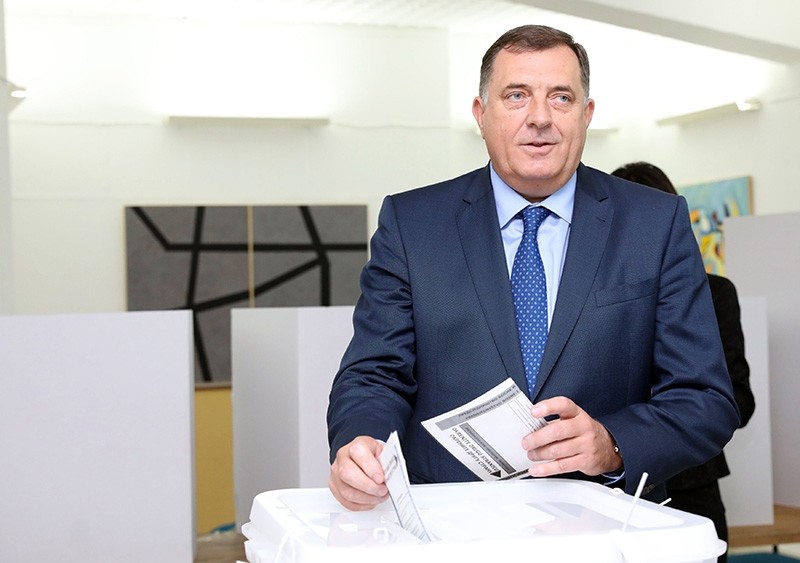 Bosnian-Serb candidate for Bosnia and Herzegovina's tripartite Presidency in the next term in office, Milorad Dodik, casts his ballot, at a voting station in Laktasi, on Oct. 7, 2018 (AFP Photo).
by Compiled from Wire Services
Oct 07, 2018 12:00 am

"This is victory as clean as a whistle and I proclaim this victory," Dodik announced, though his rival's party said the vote was too close to call.

Dodik said he won 56 percent of the vote in Sunday's election and that his main opponent, Mladen Ivanic, won 44 percent. Dodik said his claim was a projection made with 85 percent of ballots counted and not expected to change significantly.

He said "the people have decided."

Dodik's election deals a blow to efforts to strengthen the country's unity more than 20 years after a brutal ethnic war.

Some 3.3 million people were eligible to vote on Sunday for an array of institutions in Bosnia's complex governing system, created by a peace accord that ended the 1992-95 war that killed 100,000 people.

The country consists of two regional mini-states — one Serb-run and a Muslim-Croat entity — with joint institutions in a central government. Voters were electing the three-person Bosnian presidency, the Serb president and the two entities' parliaments and cantonal authorities.

The election's main focus was the Bosnian presidency because of the candidacy of hard-line Serb leader Dodik, who advocates eventual Serb separation from Bosnia.

Dodik also is a key Balkan ally of Russian President Vladimir Putin, and his victory would mean stronger influence of Russia.

Bosnia's Serbs and Croats want to move closer to their ethnic kin in neighboring Serbia and Croatia, while the Muslims want to keep Bosnia together. The issue was at the core of the 1990s' war.

The campaign was marred by divisive rhetoric and allegations of irregularities that fueled tensions. In a show of widespread popular discontent with Bosnia's politicians, thousands rallied at anti-corruption protests Friday in Sarajevo and in the main Serb city of Banja Luka.

The West has hoped prospects of EU and NATO membership would encourage nations in the Balkans to solve their disputes stemming from the dissolution of the former Yugoslavia. Russia opposes any more Balkan countries joining NATO.

Dodik is shifting to the race for the Bosnian presidency because of term limits for his current job leading the Bosnian Serb regional mini-state. His ruling coalition hopes to maintain a firm grip on power in the Serb region.

He urged the voters Sunday to elect a "compact and unified" government that will preserve the unity of Republika Srpska, the Serb entity and work to further benefit it.

"Of course I expect a victory, a big victory that will enable for important work to be done for Republika Srpska," he said.

The current Serb member of the federal presidency and a relative moderate, Ivanic, is also running, backed by an opposition Serb coalition that hopes to undermine Dodik's rule.

"I wouldn't run if I didn't believe I could win," he said.

The main ethnic Croatian presidential candidate, Dragan Covic, is also dashing hopes that Bosnia will be strengthened as a multi-ethnic union. Covic seeks the formation of a third government body, a Croat mini-state that would spell further fragmentation for the fragile nation.

He urged voters to "deliver a clear, new message" they want to turn Bosnia into a country of "absolute constitutional equality" for all ethnic groups.

Liberal candidates who back a civil society free of ethnic divisions largely have been pushed to the margins. Observers say widespread voter apathy also diminishes chances of an election surprise, despite high unemployment and widespread corruption in the Balkan nation.

"I expect a lot, but I have little hope that something will change," said Dragica Ruzic, a 72-year-old retiree from the Bosnian Serb region.

At the other side of Bosnia's ethnic divide in the capital of Sarajevo, worker Kemal Cengic, 57, said he wished "someone younger wins."

"Anyone really, just not those who have been in power so far," he said. "I don't care who wins, as long as it's someone new. There is great potential here among the young people."