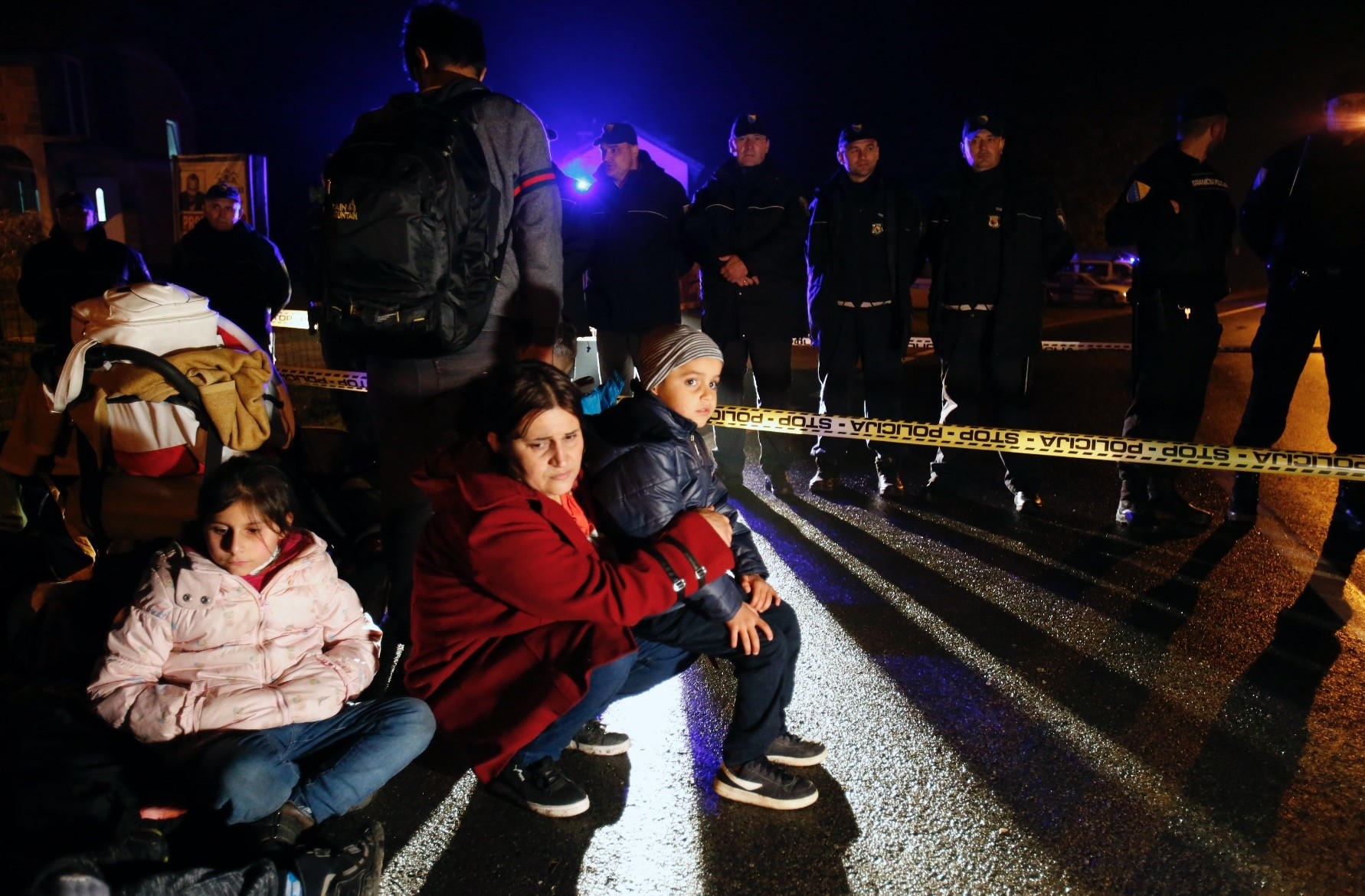 A migrant woman holds her child near a police barricade at the border crossing of Izacici, Bosnia, Oct. 22.
by Compiled from Wire Services Oct 24, 2018 12:00 am

Amid growing concerns over the worsening conditions for thousands of migrants stranded in Bosnia, hundreds have been trying to reach EU territory despite police blockades

As more migrants look to cross into EU territory from Bosnia, police have blocked them from reaching the border. The migrants camped yesterday by the road, 1 kilometer from the border crossing where police stopped them on Monday evening. They marched Monday from the northwestern town of Velika Kladusa toward Croatia in protest that the border remains closed for people trying to reach Western Europe. They turned back after spending a few hours near the Maljevac border crossing.

The migrants set up small tents, put out blankets and slept rough by the road as cars and trucks passed by. Parents wrapped children in warm clothes and blankets to protect them from the autumn chill. Sympathetic locals offered food, beverages and blankets. Another group of migrants set off yesterday morning toward a separate border crossing with Croatia.

"Our situation is very bad, so we came here because of our situation and maybe they have to understand what we are going through," Ezent Laue, who said he was from Syria, pleaded, as reported by The Associated Press (AP).

Many migrants are staying in improvised shelters, tents and dilapidated buildings, lacking running water and toilets, especially in the northwestern towns of Bihac and Velika Kladusa, near the Croatian border. Red Cross officials earlier voiced concern about the worsening conditions for thousands of migrants stranded in Bosnia and many say the government is failing to adequately protect the rights of refugees.

With only two official asylum and refugee centers, the small country of 3.5 million people, which aspires to be an EU member, is hard-pressed to cope with the migrants.

Hundreds of thousands of migrants who streamed northwards through the Balkans to EU territory in 2015 largely bypassed Bosnia. But the ex-Yugoslav republic now finds itself struggling to accommodate about 5,000 people intent on making their way via neighboring Croatia to affluent EU countries further north. In order to curb migrants entering the impoverished country en route to EU territory, Bosnia's security minister, in June, called for legislative changes to enable border deployments of the army while accusing the EU of failing to manage the crisis. More than 9,000 people from Asia and North Africa have entered Bosnia from Serbia and Montenegro since the beginning of 2018, including 3,000 over the past month, and a similar number have managed to cross into EU member Croatia.

The Balkan region has been the focus of migration-policy debates. Three years ago, the Balkan route was one of the main corridors for the more than 1 million migrants who reached Western Europe. Even though the route has all but been shut down since early 2016 through coordinated border closure measures, thousands of migrants still manage to pass through.