Tensions increase between US, Iran after Albania expels diplomats 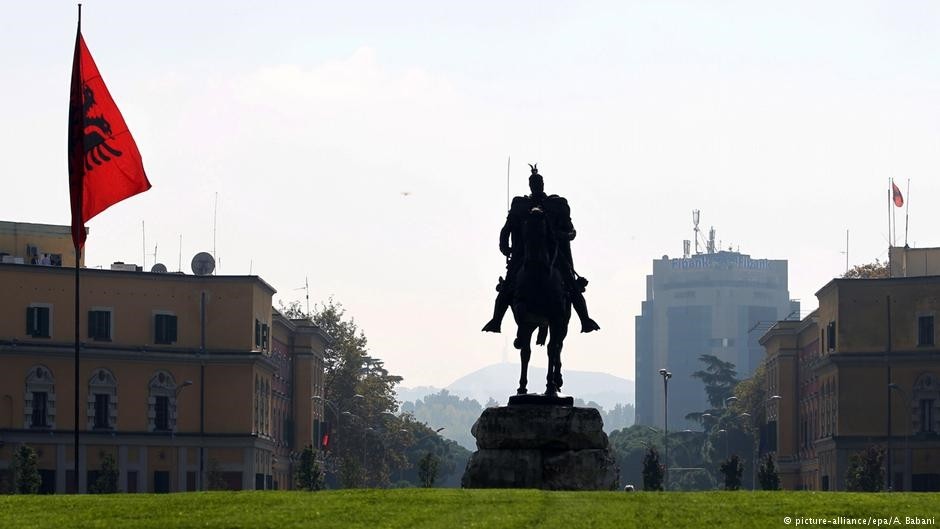 Iran denounced Albania's decision to expel two Iranian diplomats, warning the Balkan country not to be a ‘victim' of a scenario fabricated by the U.S. and Israel

Iran's foreign ministry yesterday condemned Albania's decision to expel two Iranian diplomats and said it was based on "fabricated intelligence" and taken under U.S. pressure. "This unjustifiable behavior of the Albanian government... is completely based on false and fabricated intelligence and is unacceptable and condemned," it said in a statement, as reported by Agence France-Presse (AFP).

The official IRNA news agency quoted Foreign Ministry spokesman Bahram Ghasemi as saying that "Albania has become an unintentional victim of the United States, Israel and some terrorist groups." The spokesman said the U.S. and Israel are working to destroy relations between Iran and European countries, and that Albania should not allow others to dictate its relations with Tehran.

Tensions have risen between Iran and the U.S. after U.S. President Donald Trump withdrew from a multilateral nuclear deal in May and reimposed sanctions on Iran. Israel regards the Islamic republic as its most dangerous enemy and has backed Trump's decision in May to exit from the nuclear deal.

The move came "at a time that cooperation between Iran and Europe for bypassing unilateral and illegal U.S. sanctions has become ever more serious." European countries have been working to set up a Special Purpose Vehicle (SPV) to help Iran gain the economic benefits of its 2015 nuclear deal with world powers.

Albania said Wednesday it has expelled the diplomats for security reasons, with U.S. officials identifying one as the ambassador and saying the pair had plotted "terrorist attacks" in the Balkan country. The private Top Channel television network said the Iranians were suspected of illegal activities related to a World Cup qualifying match between Albania and Israel two years ago. About 20 people were arrested in Albania and Kosovo following that match, which was threatened with an alleged terrorist plot.

In a statement welcoming the move, U.S. Secretary of State Mike Pompeo described the diplomats as "two Iranian agents who plotted terrorist attacks in Albania."

U.S. President Donald Trump thanked Albania for expelling the Iranian ambassador and another diplomat. Trump's letter to Albanian Prime Minister Edi Rama, dated Dec. 14, thanked him "for your steadfast efforts to stand up to Iran and to counter its destabilizing activities and efforts to silence dissidents around the globe." The U.S. Embassy in Tirana published the letter on its Facebook page yesterday.

U.S. National Security Adviser John Bolton, who played a major role in President Trump's order in May to pull the U.S. out of the 2015 international nuclear deal with Iran, publicly supported Albania's decision. "Prime Minister Edi Rama of Albania just expelled the Iranian ambassador, signaling to Iran's leaders that their support for terrorism will not be tolerated," Bolton said in a Twitter post. "We stand with PM Rama and the Albanian people as they stand up to Iran's reckless behavior in Europe and across the globe."

Albania's relations with Tehran have been strained after taking in about 3,000 members of the banned Iranian opposition group, the Mujahedin-e Khalq, at the request of U.S. authorities and the U.N. in 2013. Their relocation from a camp in Iraq was completed in 2016 when the last 280 people left for Albania. They currently live in a compound in the northwest of the country.