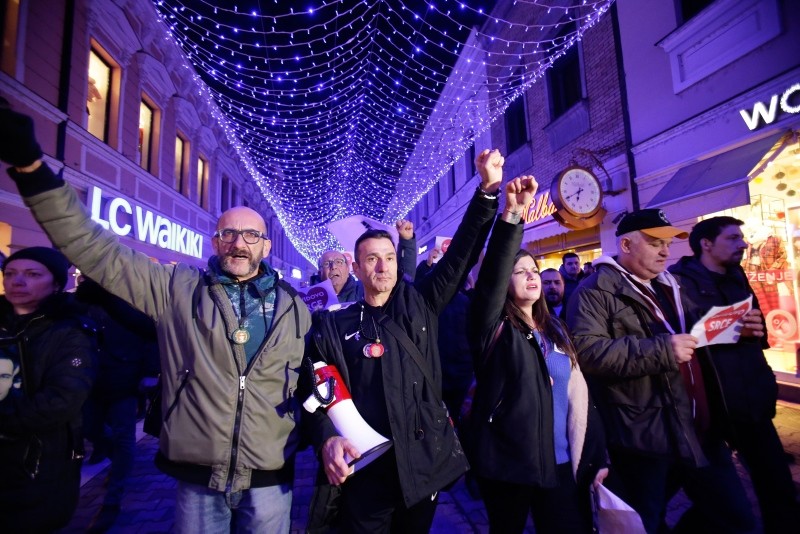 Thousands of people demanded the resignation of Bosnian Serb Interior Minister Dragan Lukac on Sunday, accusing him and police officials of covering up the murder of a 21-year-old student.

For the nine months since David Dragicevic was found dead in March in a creek in the town of Banja Luka, after being missing for six days, his father Davor has held a daily protest in the town square to demand the truth.

His quest has now morphed into a larger movement of citizens fed up with corruption and with what they say is Bosnia's poor rule of law. Smaller-scale protests in solidarity with the grieving father took place in Croatia and Serbia last week.

The police first said David had committed suicide but later said it was a possibility that he was killed. No evidence of murder had been found by the prosecution team handling the case.

It is not immediately clear why campaigners suspect police involvement, or if the student had been known to officers, but they point to the length of time without any resolution to the investigation as reason for suspicion.

"If some ordinary guy killed my child, he would have been arrested long time ago. It has to be someone very powerful," Suzana Radanovic, David's mother, said.

The protesters, who gathered around a heart-shaped shrine which was raised again in the square on Sunday after it was cleared by police, chanted "Resignation", "Lukac the killer", "Justice for David".

Bosnian Serb leader Milorad Dodik said on Sunday that Dragicevic's demands could not be met because there was no evidence of police involvement in the murder. He also said the protests were manipulated by opposition politicians.

"The street will not model political decisions in Republika Srpska," Dodik said during his annual news conference, referring to Bosnia's autonomous Serb-dominated region.

Some opposition politicians have been joining protests but have stressed that they were coming as citizens, not politicians. Several of them, including a regional parliament deputy, were briefly detained last week during a scuffle with police who detained Dragicevic over alleged threats to Lukac.

Police searched Dragicevic's house for weapons and released him after they found no evidence. Lukac said any future unregistered protests would be prevented.

The European Union delegation and the office of Bosnia's international peace overseer expressed concerns about his arrest and urged all sides to refrain from violence.

A solidarity protest was also held in the Bosnian capital of Sarajevo on Sunday, where another father is demanding the truth about what he says is his son's murder.