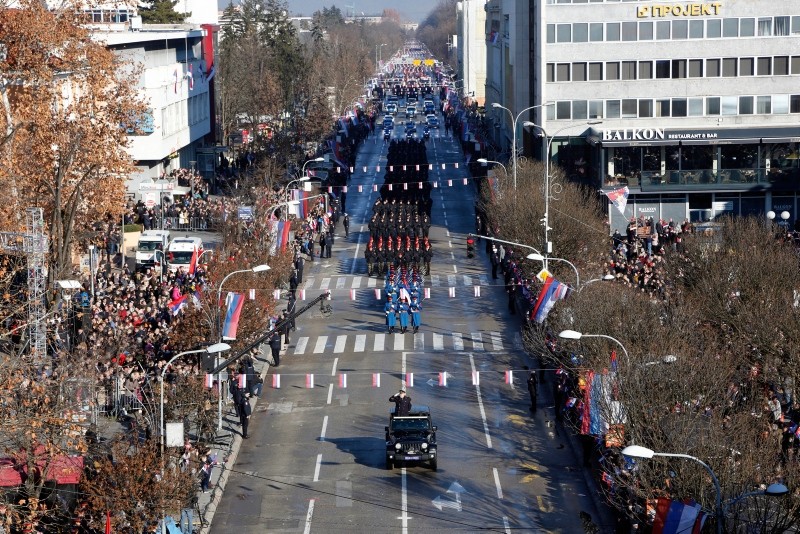 Thousands of Bosnian Serbs cheered parading security forces in celebration of the "national holiday" of their entity, Republika Srpska, on Wednesday, despite a legal ban and objections of Bosnian Muslims who view it as a provocation.

The event marks the creation of a "Serb republic" in Bosnia on January 9, 1992, three months ahead of an ethnic war that claimed 100,000 lives and displaced more than two million people.

Security forces and armoured vehicles filed through the northern town of Banja Luka, capital of the Bosnian Serb-run entity on Wednesday for the event, which is opposed by Muslims in Bosnia.

They are linked by a loose central government and tripartite presidency that includes representatives of three major communities.

Republika Srpska is predominantly made up of Orthodox Christian Serbs who account for a third of Bosnia's 3.5 million inhabitants.

Muslims comprise half the country's population, while Catholic Croats are the third major ethnic group, representing 15 percent of the total.

Bosnia's constitutional court ruled in 2015 that the holiday discriminates against the country's Muslims and Croats.

Leaders of Republika Srpska have defied the ruling, even seeking to boost the prominence of the celebrations.

Muslim political representative in Republika Srpska Ramiz Salkic said the celebrations in Banja Luka were a "sham" and that January 9 should be a "memorial day for the victims".

"The truth is that crimes were committed on behalf of this republic of Bosnian Serbs," he was quoted by Fena news agency as saying.

Groups of Bosnian Muslims used the occasion Wednesday to visit the memorial for the Srebrenica massacre.

Bosnian Serb forces executed 8,000 Muslim men and boys in Srebrenica in July 1995, the worst atrocity in Europe since the World War II, which was ruled genocide by two international courts.

Among the founders of the Republika Srpska was Radovan Karadzic, its wartime president, who is jailed by an international court for genocide for the Srebrenica massacre.

"I want to thank to those who created Republika Srpska," the entity's president Zeljka Cvijanovic said at the ceremony.

Bosnian Serb strongman Milorad Dodik, who has served as the Serb member of Bosnia's tripartite presidency since November, attended Wednesday's parade, along with the Prime Minister of neighbouring Serbia, Ana Brnabic.

Serbian President Aleksandar Vucic also sent a message to mark the occasion, saying the Republika Srpska could "always count on the generous support" of his country.