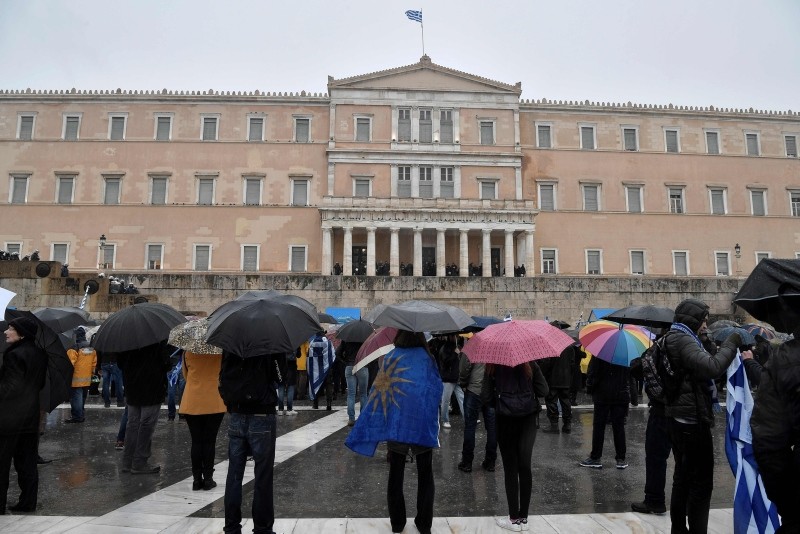 Protesters gather under pouring rain in front of the Greek parliament in Athens on January 25, 2019 during a demonstration against the name change deal with neighbouring Macedonia. (AFP Photo)
by Associated Press Jan 25, 2019 4:34 pm

The ratification means a deal to normalize relations with Macedonia, under which Greece's northern neighbor will rename itself North Macedonia and Athens will drop its objections to the country joining NATO.

Several small protests were underway on the same day, but only a few dozen braved torrential rain in Athens.

Opposition is particularly fierce in the northern Greek region of Macedonia, which borders the former Yugoslav republic that claimed the same name after declaring independence in 1991. Critics claim the deal signs away their identity and a cultural heritage dating back to Alexander the Great more than 2,300 years ago.

More than 150 people have been detained for questioning since Thursday following violence at demonstrations against the deal in Athens and two towns in northern Greece. Most were released without change.

At least two lawmakers from the governing left-wing Syriza party say their homes were targeted by violent demonstrators, while another was targeting in a firebombing that caused no injuries. Greece's tourism minister, an independent conservative who supports the government, said she had received multiple death threats.

The agreement has already cost Prime Minister Alexis Tsipras his parliamentary majority after the right-wing Independent Greeks quit the governing coalition in protest.

Tsipras will rely on limited opposition backing for the ratification vote but already has the declared support of enough independents in parliament to secure a majority.