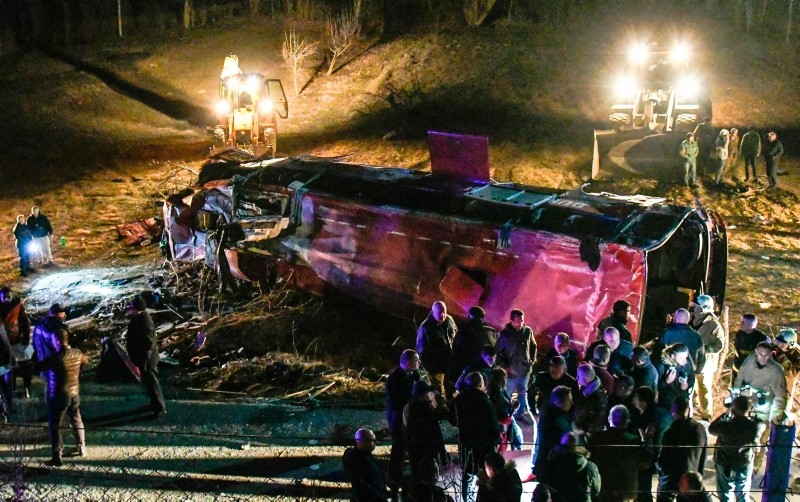 North Macedonia has declared two days of national mourning following a bus crash that killed 14 people and left 30 others injured.

The bus carrying workers from the capital Skopje back to the central town of Gostivar plunged into a ravine late Wednesday. Health Minister Venko Filipchev, who visited a hospital Thursday where most of the injured passengers were taken, said seven of them were in critical condition.

Declaring the two days of mourning, Prime Minister Zoran Zaev said: "I have no words that could be sufficient to comfort the families of our fellow citizens who have tragically lost their lives tonight in a severe road accident. We are filled with immense pain and sorrow."

President Recep Tayyip Erdoğan extended his condolences to the families of those who lost their lives in the accident, and wished a speedy recovery to the wounded.

With great sadness, the president also said he offered his condolences to the brother nation of North Macedonia.

The bus was carrying 51 people when it turned over 20 kilometres (12 miles) from the capital Skopje, the interior minister said. Most of them were treated in hospital.

Witnesses quoted by local media said the driver appeared to lose control of the bus on the Skopje-Tetovo highway. Authorities have not yet commented on the cause of the crash.

Workers in the capital Skopje often take the bus route to get home to the towns of Tetovo and Gostivar.