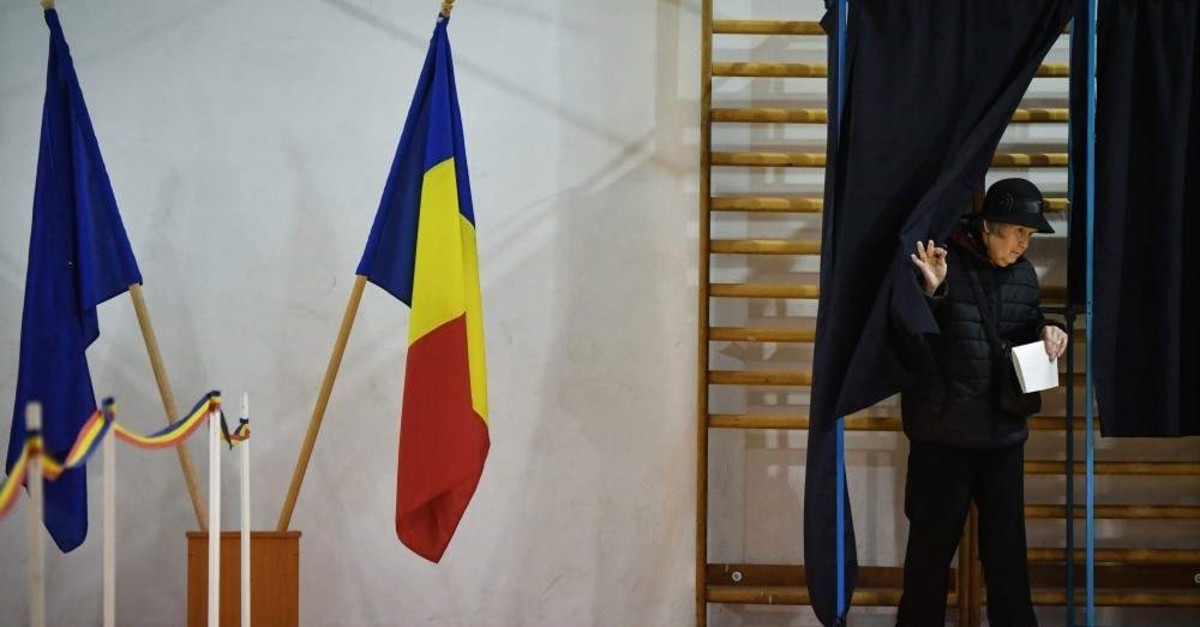 A woman exits a voting booth during the second round of presidential elections in Bucharest November 24, 2019. (AFP Photo)
by Compiled from Wire Services Nov 24, 2019 12:30 pm

Romanians started voting Sunday in the second round of presidential elections that are expected to return Klaus Iohannis to office, confirming the pro-European trajectory of the eastern EU member.

Thirty years after the fall of communism, the center-right former physics professor is running against Social Democrats (PSD) leader and former prime minister Viorica Dancila, whose government fell last month in a no-confidence vote. While there have been no recent opinion polls, local bookmakers make Iohannis the short-odds favorite to beat Dancila comfortably in Sunday's runoff.

In a first round of voting on November 10, incumbent Iohannis gained 38% of the vote, ahead of 13 other candidates. Dancila came second with 22%.

Analysts say voters who backed lower-placed candidates can be expected to largely swing behind Iohannis on Sunday, amid deep resentment towards the PSD over controversial judicial reforms.

"I voted for a Romania that is modern, European and normal," Iohannis told reporters after casting his ballot.

Those abroad, who tend to favor liberal candidates, have three days to cast their ballots so by early Sunday, 400,000 of them had already voted, up a third compared to the first round.

In the first round, just three percent of them voted Dancila.

"I will vote for a president to represent us, one that is respected both at home and abroad. This is the one we need," said retired army staff Ioan Banu, while heading to a Bucharest college to cast his ballot, after polls opened at 05.00 GMT.

The president's powers are mostly limited to nominating a prime minister on the basis of who can command a majority, challenging laws in the Constitutional Court, and appointing some chief prosecutors.

The PSD government had engaged in a long battle with Brussels – and Iohannis who backed the EU – over allegations it was trying to push through measures to neuter the judiciary and benefit PSD politicians.

The left-wing party is seen as the successor of the elite which dominated the country before the overthrow of communism in 1989 and is accused of harboring corruption in its ranks.

And while nationalism has been less present in Romanian politics than elsewhere in the region, such as in Hungary or Poland, the PSD also tried to frame its clashes with European Union institutions as evidence that the party was standing up for Romania.

"I voted for a presidential mandate where we see more involvement and respect for the Romanian people and for our national interests," Dancila, whose party has dominated post-communism Romania, told reporters after voting.

After a parliamentary no-confidence vote last month deposed the PSD-led administration in power since late 2016, Iohannis tasked ally Ludovic Orban with forming a new government to be in place until legislative elections due late next year.

In his bid for a fresh five-year mandate, Iohannis – who made the rule of law a central plank of his campaign – promised to build up the EU member with functioning institutions and without corruption.

If elected again, Iohannis will have a chance to install anti-graft and anti-mafia prosecutors who are serious about tackling endemic corruption with the backing of Orban.

Former foreign minister Cristian Diaconescu said Iohannis – who hails from the German minority and whose 2014 victory over a PSD candidate was a surprise – guaranteed "predictability" in Bucharest's foreign policy.

Teacher Andreea Mihai, 50, said that if Iohannis won on Sunday, "things should slowly return to normality."

"Both Orban and Iohannis will work together in the same direction."

Under the constitution, Romania's president is responsible for foreign affairs as well as approving the appointment of judges and top prosecutors.

Hundreds of thousands of Romanians have protested against the judicial reforms proposed by the PSD, seen as giving politicians a way to avoid corruption sentences.

One sociologist Alin Teodorescu has estimated that introducing the controversial judicial reforms has cost the PSD more than a million votes.

The PSD for its part has accused Iohannis of being a "dictator".

"He's a coward and an arrogant man," Dancila, 55, an engineer by training, said.

Criticized for refusing any face-to-face debate during the campaign, Iohannis called his rival the "incarnation of a toxic regime".

Dancila has highlighted the strong economic growth recorded during the PSD's time in office by increases in pensions and salaries in the public sector.

But this largesse has sparked concerns by the EU and the International Monetary Fund (IMF) which has warned that a new pensions law could double the country's fiscal deficit.

Analysts say Dancila's survival as the head of PSD is at stake on Sunday.

Her 22% of the vote in the first round was half of what PSD got in 2016 elections and follows a rocky ride for the party this year.

In May, its powerful then-leader Liviu Dragnea was jailed on corruption charges, and the party also saw its support plunge during European elections.

The PSD has become increasingly reliant on an ageing, rural electorate with a striking fifth of the country's population having emigrated in search for better-paying jobs.

Polling stations, which opened at 07:00 local time (05:00 GMT), will close at 21:00 local time, shortly after which initial results will be released.