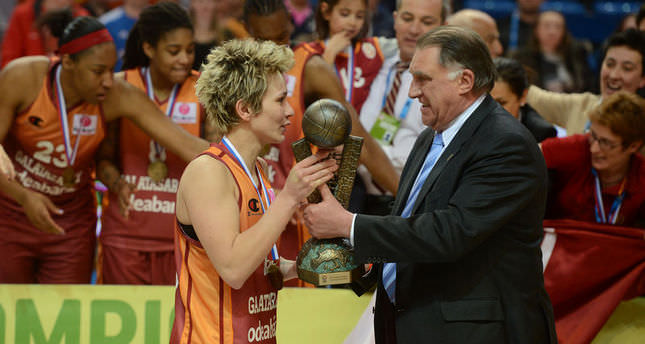 by Daily Sabah Apr 15, 2014 12:00 am
ISTANBUL — Galatasaray Odea Bank defeated Fenerbahçe 69-58 in the final of the FIBA Women's Euro League in Yekaterinburg.

Galatasaray took the lead in the first quarter, scoring 26 points to Fenerbahçe's seven.

The second quarter saw Galatasaray further their lead over their arch rivals 42-29.

The Canaries were able to close the enormous gap between the two sides in the third quarter to just nine points as the scoreboard read 53-44 at the buzzer. Galatasaray were able to close off the game with Şebnem Kimyacıoğlu's three point effort to lift the trophy following a 69-58 victory.

Fenerbahçe also made it to the final last year before loosing to UMMC Ekaterinburg.

This year's FIBA Euro League saw Turkish teams dominate the semi-finals as three out of the four finalists (Galatasaray Odea Bank, Fenerbahce and Kayseri KASKİ) were from Turkey.

The three curently sit atop the Turkish Women's Basketball League as Galatasaray leads the pack with 50 points, Fenerbahçe sits in second with 49 points and Kayseri KASKİ sits in third with 45 points.

This trophy is Galatasaray Odeabank's greatest to date, however they lifted the FIBA Women's Euro Cup, the continet's lesser competition, trophy in 2008.

Turkey's success in women's basketball and other competitions in recent years has gone to show that Turkey's recent investments in women's sports are beginning to bear fruit and that Turkey's female athletes are excelling in new sports other than volleyball.