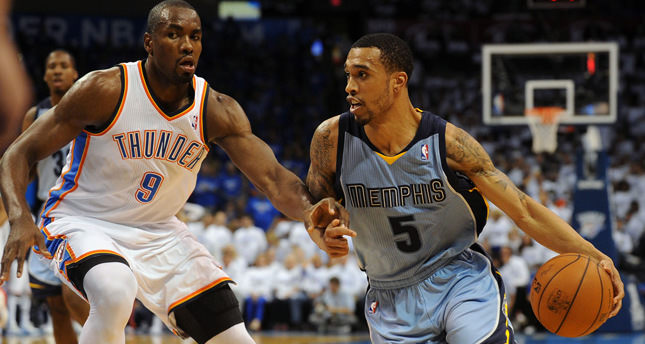 by Associated Press Apr 22, 2014 12:00 am
OKLAHOMA CITY — Zach Randolph scored 25 points to help the Memphis Grizzlies defeat the Oklahoma City Thunder 111-105 in overtime to level their first-round playoff series at one game each.

In Monday's other game, the Los Angeles Clippers leveled their series with the Golden State Warriors at 1-1 after leading all the way for a convincing 138-98 home win.

Kevin Durant had 36 points and 11 rebounds for the Thunder. Russell Westbrook scored 29 points for Oklahoma City, but he made just 11 of 28 shots.

Game 3 is Thursday night in Memphis.

Los Angeles started the game on a 14-4 run and kept on going, maintaining a sizeable double-digit lead through the final three quarters. They finished with a franchise record points for a playoff game.

All the foul trouble that plagued Griffin and Paul in the Clippers' four-point loss in Game 1 belonged to the Warriors this time.

Stephen Curry scored 20 of his 24 points in the third quarter, when the Warriors never got closer than 25 points, while playing with four fouls. Klay Thompson finished with seven points 15 under his average and four fouls.
Last Update: Apr 22, 2014 10:58 am
RELATED TOPICS