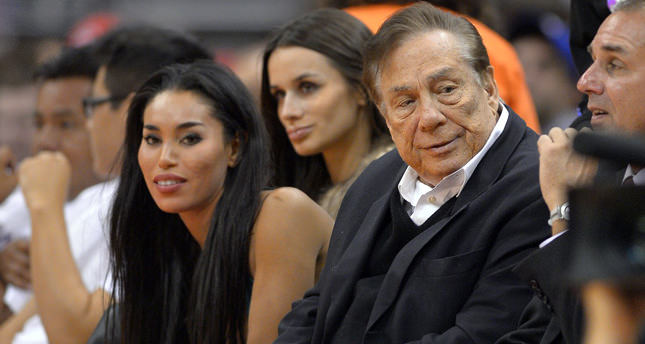 by reuters
Apr 27, 2014 12:00 am
LOS ANGELES — The NBA is investigating an audio recording posted online of Los Angeles Clippers owner Donald Sterling allegedly telling his girlfriend not to post photographs of herself with black people and not to bring African-Americans to Clippers games, league officials said on Saturday.

Celebrity news site TMZ.com published the 10-minute recording on its website late on Friday, describing it as a taped conversation between the billionaire Sterling and a model who goes by the name V. Stiviano.

"The audio recording posted by TMZ is truly offensive and disturbing, and we intend to get to the bottom of it as quickly as possible," NBA Commissioner Adam Silver said at a news conference on Saturday night.

The recording was sharply criticized by civil rights leaders, fans and players.

Clippers all-star player Chris Paul called the tape "a very serious issue," and the Miami Heat's LeBron James was quoted as saying there was "no room for Donald Sterling in our league."

It was not immediately clear when and how the conversation was recorded.

Silver said the league would move swiftly to determine the authenticity of the recording and its context. Sterling has agreed not to attend his team's playoff game on Sunday against the Golden State Warriors, Silver said.

The commissioner said a range of sanctions was possible but declined to predict the outcome of the investigation, saying Sterling should be given a chance to present his side.

Clippers President Andy Roeser issued a statement on Saturday saying they have listened to the tape on TMZ.

"We do not know if it is legitimate or it has been altered. We do know that the woman on the tape - who we believe released it to TMZ - is the defendant in a lawsuit brought by the Sterling family," the statement said.

"Mr. Sterling is emphatic that what is reflected on that recording is not consistent with, nor does it reflect his views, beliefs or feelings."

The tape appears to be an argument over photos Stiviano posted to the social networking website Instagram.

"People call you and tell you that I have black people on my Instagram. And it bothers you," Stiviano says, according to a version of the tape at TMZ.com. In the tape, Stiviano says she herself is of Latino and black heritage.

"Yeah, it bothers me a lot that you want to promo ... broadcast that you're associating with black people. Do you have to?" Sterling says on the tape, according to TMZ.

At another point, Stiviano says he does not want her to bring black people to basketball games, and tells him: "I'm sorry that you're still racist in your heart."

Sterling also is allegedly heard telling her not to post photos of herself with Earvin "Magic" Johnson. "And don't bring him to my games, OK?"

Johnson, an NBA Hall of Famer who led the Los Angeles Lakers to five championships in the 1980s, said in a Twitter post that Sterling's comments are "a black eye for the NBA."

Sterling is "upset and apologizes" for the sentiments attributed to him about Johnson, the Clippers' statement said.

"He has long considered Magic a friend and has only the utmost respect and admiration for him - both in terms of who he is and what he has achieved," it said.

Sterling, who made his fortune in real estate, has faced allegations of discriminatory conduct in the past. In 2009, he paid $2.7 million to settle a case brought by the U.S. Justice Department which accused him of housing discrimination against blacks and Hispanics.

Paul, who in addition to playing point guard for the Clippers is also president of the NBA Players Association, said the team's players need to focus on their playoff series. But he also expressed concern over the tape.

"On behalf of the National Basketball Players Association, this is a very serious issue which we will address aggressively," Paul said.

Clippers head coach Doc Rivers said he did not like the comments and that the team was upset by the distraction.

"I think the biggest statement we can make as men, not as black men, but as men, is to stick together and show how strong we are as a group," Rivers told reporters after his team's practice on Saturday afternoon.