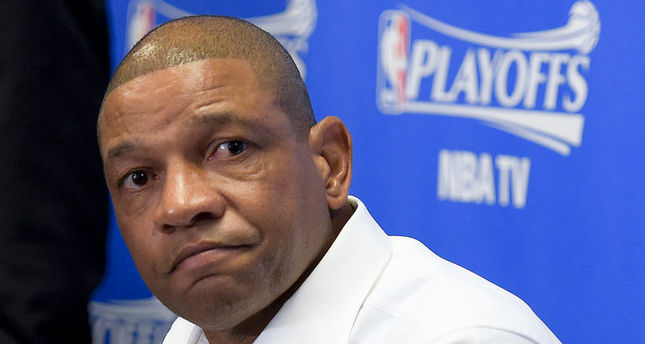 Silver said the Clippers owner was fined $2.5 million and was banned from any association with the team for life. Silver added that he would urge other owners to force a sale of the team.

Silver said the lifetime ban would stand regardless of whether Sterling was ultimately forced to sell the team he's owned for 33 years. The commissioner said the NBA constitution allowed owners to eject Sterling if three-quarters of the owners voted in favor of such a move, and that he would commence the process of expulsion immediately.

"I fully expect to get the support I need from the other NBA owners to remove him," said Silver, who appeared visibly agitated throughout his remarks.

Dallas Mavericks owner Mark Cuban tweeted his support, saying he agreed "100%" with Silver's findings and the actions taken against Sterling.

Under the terms of Silver's punishment, the 80-year-old Sterling cannot attend any NBA games or practices and is not allowed to inhabit any Clippers facility or participate in any business or player personnel decision involving the team. Sterling is also barred from the NBA's Board of Governors meetings and other league activities, Silver said.

The commissioner said the $2.5-million fine was the maximum allowed under the league constitution and would be donated to organizations dedicated to anti-discrimination and tolerance efforts. The NBA and the National Basketball Players Assn. will jointly select those organizations.

Silver said Sterling acknowledged that it was his voice on two recently released recordings in which he told a female friend he disapproved of her bringing black friends to Clippers games.

"The views expressed by Mr. Sterling are deeply offensive and harmful," Silver said. "That they came from an NBA owner only heightens the damage and my personal outrage."

Asked if he expected Sterling to fight his decision, Silver said, "I have no idea."

Silver said it did not matter that Sterling's comments were recorded without his knowledge in a private setting. "Whether or not these remarks were shared in private," Silver said, "they are now public and they represent his views."