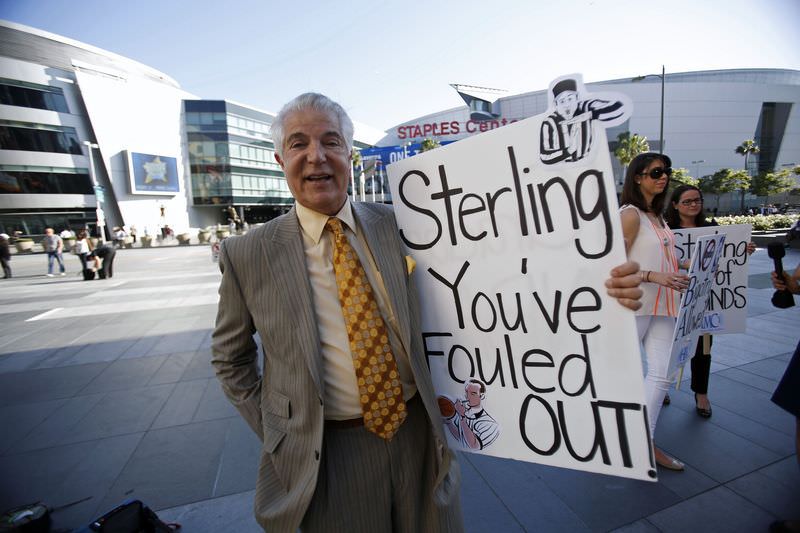 NBA commissioner Adam Silver delivered the swiftest, strongest penalty he could, then called on NBA owners to force Clippers owner Donald Sterling to sell the team for making racist comments

NEW YORK — The majority of owners supported the commissioner Tuesday, as he handed down one of the harshest sanctions in the history of U.S. sports.

"We stand together in condemning Mr.Sterling's views. They simply have no place in the NBA," Silver said at a news conference.

Sterling, 80, is banned for life from any association with the league or the Clippers and fined $2.5 million, the maximum allowable under the NBA constitution. If three-fourths (22) of the other 29 owners agree to Silver's recommendation, Sterling will be forced to sell the team he has owned since 1981.

Most NBA ownership groups reached Tuesday by the Associated Press said they will vote to force Sterling to sell. The teams were asked the specific question of whether Sterling should be forced to sell, and 16 ownership groups said yes, while eight declined to reveal their stance.

Five ownership groups, not including the Clippers, could not be reached. None of the teams contacted by the AP said they would vote in favor of Sterling retaining his ownership.

Silver's announcement is the culmination of a controversy that has rocked the sports world since Saturday, when Sterling's comments became public. It has overwhelmed the Warriors-Clippers playoff series, leading to searching questions about whether the league had too long tolerated previously questionable behavior from Sterling and whether players and coaches had compromised themselves by joining the Clippers' organization.

Players and others cheered Silver's quick action Tuesday, with union officials saying that if the league's punishment hadn't included a mandate for Sterling to sell, players were considering boycotting playoff games, including Tuesday's Warriors-Clippers game at Staples Center.

Warriors guard Stephen Curry said that had Silver merely announced an indefinite suspension and fine, every Warriors player planned to walk off the court as the jump ball was tossed for the opening tipoff.

"It would have been our only chance to make a statement in front of the biggest audience that we weren't going to accept anything but the maximum punishment," Curry said. "We would deal with the consequences later, but we were not going to play."

State Warriors, but players league-wide do something about it," Mason Jr. said.

Clippers coach Doc Rivers said before Tuesday's game, "(Silver) made the decision that really was the right one that had to be made. I don't think this is something that we rejoice in or anything like that. I told the players about the decision, and I think they were just happy there was a resolution and that it's over, at least the start of it. I think we're all in a better place because of this."

Sterling's comments, which were recorded by his girlfriend and released by TMZ on Saturday, harmed the league, Silver said. Sponsors were threatening to abandon the NBA, and criticism was coming from fans on social media and the White House.

"It bothers me a lot that you want to broadcast that you're associating with black people.Do you have to?" Sterling asks the woman on the tape. "Sentiments of this kind are contrary to the principles of inclusion and respect that form the foundation of our diverse, multicultural and multi-ethnic league," Silver said.

Sterling is immediately barred from attending any NBA games or practices, being present at any Clippers office or facility, participating in any business or player personnel decisions involving the team, or being part of any league business.

The fine will be donated to organizations dedicated to anti-discrimination and tolerance efforts, Silver said.

Sterling has an estimated net worth of about $2 billion. Silver said Sterling did not apologize for his remarks but confirmed that he was the person on the audiotapes.