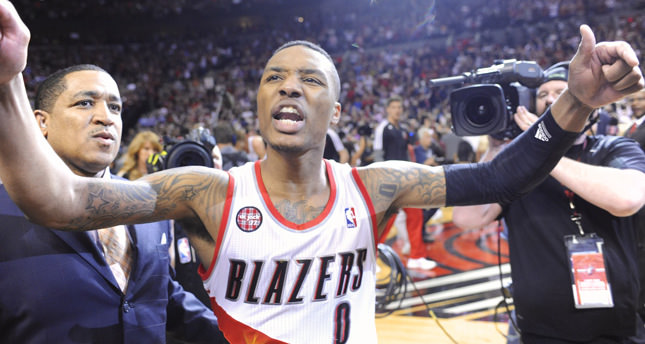 by May 03, 2014 12:00 am
PORTLAND — Lillard buried the game-winning 3-pointer as the shot clock expired and the Portland Trail Blazers advanced to the second round of the Western Conference for the first time since 2000 with a thrilling 99-98 game 6 victory over the visiting Houston Rockets on Friday night.

"I think he lives for those moments," Portland coach Terry Stotts said. "It was a remarkable shot."

The Blazers trailed 98-97 after Chandler Parsons layup following a scramble under the basket with 0.9 seconds remaining, setting the
stage for Lillard's heroics. Portland's Nicolas Batum in-bounded the ball to Lillard, who had raced from right to the left elbow and launched a wide-open triple over the late-arriving Parsons that swished through.

The game-winner sent the sold-out crowd into a frenzy as Portland moved into the semi-finals following six straight first-round exits.

"They wanted me to come to the ball hard," Lillard explained. "I was able to get to the ball raised up and snapped my wrist. I got a good
look and it went in."

"We specifically said no 3's but we didn't execute defensively," Rockets coach Kevin McHale said. "He came flying out, he got
separation on the first step and Chandler never caught up. He made a hell of a shot."

LaMarcus Aldridge had 30 points with 13 rebounds while Lillard netted 25 with six triples for Portland, which awaits the winner of the San
Antonio-Dallas series with game 7 on Sunday.

James Harden led Houston with 34 points, Dwight Howard had 26 with 11 boards while Parsons finished with 16 points and 12 rebounds.

"It hurts to be going home this early," Howard said. "It should push us for next season."

Added McHale: "It's a frustrating way to end the season. We had a great opportunity to bring it (game 7) back to Houston but didn't get
it done."

Monta Ellis erupted for 12 of his 29 points in the final quarter, German superstar Dirk Nowitzki added 22, and the Mavericks forced a deciding game 7 after rallying past the visiting Spurs in their Western Conference opening round playoff series.

The Mavs head back to San Antonio for game 7 Sunday looking to become just the sixth No. 8 seed to upset a No. 1 in playoff history.

"It's another one-game series," Dallas coach Rick Carlisle said. "We know what it's about and we want this opportunity. This is what you
live for if you're in this sport." Frenchman Tony Parker scored 22, Brazil's Tiago Splitter added 19 while Danny Green shot 7-of-7 en route to 17 points for the Spurs, who get a final shot at home to close out their Texas rivals at home.

"We're playing a great team so give them credit," Parker. "That's why you play the whole season for game 7."

Ellis buried the go-ahead 3-pointer and converted a three-point play around one by Blair to put the hosts ahead 102-94 with three minutes
left.

Trailing by seven, Parker hit three consecutive layups to pull the Spurs within 106-105 with 49.4 seconds left.

After two Vince Carter free throws gave Dallas a three-point edge, Blair stripped Parker of the ball as he tried to pass from under the basket. He hit 1-of-2 free throws to make it 109-105 with 28.7 seconds showing.

Spurs' Kawhi Leonard had a short jumper rim out. Blair grabbed the miss and split two more from the stripe with 23.7 to go for a 110-105
advantage.

Ellis took the in-bounds pass in the backcourt, dribbled down the clock but fired a pass out of bounds, giving the Spurs a final shot.

The Spurs advanced the ball to the front court after a long pass was tipped out of bounds by Ellis. Mills took the pass and launched a desperation 3-point try that fell well short of the mark at the final buzzer.

Deron Williams shook off a third quarter left ankle sprain with 23 points, Joe Johnson had 17 and the sixth-seeded Nets routed the visiting third-seeded Raptors to force game 7 of their Eastern Conference opening round playoff series.

DeMar DeRozan tossed in 28 points for Toronto, which hosts game 7 on Sunday.

"We worked for the third seed to get home-court advantage," Raptors guard Lowry said. "We have to take care of home, home is not going to take care of us."
Last Update: May 03, 2014 11:28 am
RELATED TOPICS