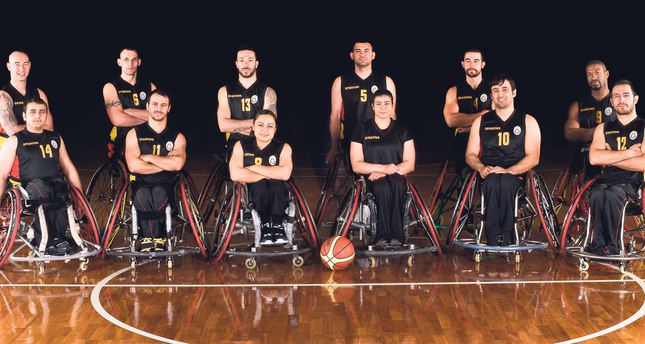 The 'Unstoppable Lions' defeated Spain's C.D. Fundosa Once 71-64 to win the IWBF Champions Cup for the fifth time in just six years

ISTANBUL — Galatasaray became the second most successful club in the history of the International Wheelchair Basketball Federation (IWBF) Champions Cup following their win over C.D. Fundosa Once on Sunday night. The Unstoppable Lions roared their way to the podium for the fifth time in six years, having come in second in 2012.The 71-64 result cemented Galatasaray's place as Europe's best wheelchair basketball team. The Lions took to the court starring Özgür Gürbulak, Ferit Gümüs, Seyran Orman Kurt, Matheuz Filipski and Rodney Hawkins.

The first stages of the game saw the two sides engage in a back-andforth battle. It was not until C.D. Fundosa Once's Bill Lathem botched five attempts that Galatasary were able to take a firm lead. The first 10 minutes ended with in a 19-15 lead for the Lions.

Terrance Bywater got the second quarter off to a booming start when his three point make decreased the difference between the teams to just one point. Piotr Luszynski's efforts kept Galatasaray from falling too far behind their opponents as the closely contested quarter ended with the Lions falling down by one to C.D. Fundosa Once 32-33.

Galatasaray once again came in front as Hawkins and Gümüs both scored at the start of the third quarter. Gürbulak also received more touches in the third quarter and with a little under five minutes remaining Galatasaray went ahead 45-37. C.D. Fundosa introduced Alejandro Zarzuela into the game in the third quarter, where his immediate impact resulted in the score leveling at 45-45 with slightly under three minutes left. Galatasaray would once again go on the attack resulting in a 52-47 advantage at the end of the quarter.
Gürbulak and Bywater both started the final quarter off by answering one another's buckets. With little over nine minutes left to play Bywater was called for an unsportsmanlike foul while Hawkins committed a technical foul immediately afterward. With only five minutes left in the game Galatasaray held a slim 60-57 advantage over their Spanish counterparts. As the clock wound down the excitement in the game didn't as both sides kept adding to their scores. At the final buzzer the Unstoppable Lions had won the match 71-64 to lift their fifth Champions Cup title.

Filipski and Hawkins of Galatasaray were the two top scorers of the match recording 16 points each. Filipski also recoded seven rebounds and nine assists while Hawkins amassed 12 rebounds. galatasaray's remarkable achievement of winning the IWBF Champions Cup five times and becoming the runners up once over six years is a testament to Turkey's advances in assisting challenged athletes.

Founded in just 2005, the Galatasaray wheelchair basketball team shook the continent with unparalleled success in just six years, winning their first continental double one year after its founding.