Heat and Spurs take care of business at home 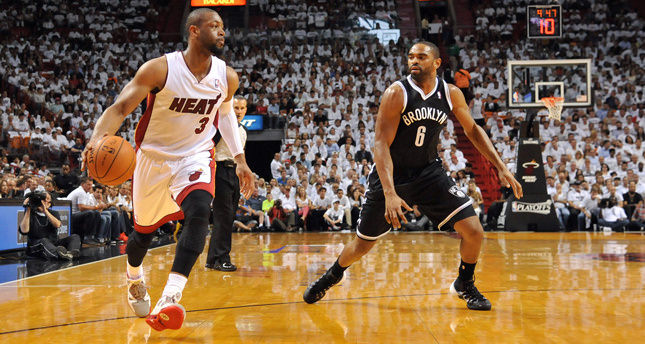 by Associated Press May 09, 2014 12:00 am
MIAMI — Miami ground down Brooklyn and San Antonio was in control throughout to beat Portland as the two experienced outfits won on Thursday to take 2-0 leads in their NBA second-round playoff series.

Mirza Teletovic set a Nets playoff record with six 3-pointers, on his way to a 20-point night off the bench. Shaun Livingston scored 15, Paul Pierce had 13 and Joe Johnson added 13 more for the Nets.

Game 3 is Saturday in Brooklyn.

Miami led by only two points midway through the fourth quarter but back-to-back 3s opened some breathing space. And then a marathon possession for an NBA team 100 seconds sealed the deal for Miami.

The Nets did not get the ball back until 1:59 remained, after the Heat got three offensive rebounds to extend the possession and build its lead to 10 points to effectively seal the game.

Miami was scoreless for the game's first 3:32, the longest Heat drought to open a home game since 2005. And that set the tone for some serious offensive struggles in the early going, with the Nets scoring only 21 points in the first quarter yet still leading by six.

San Antonio's Kawhi Leonard scored 20 points while Tony Parker had 16 points and 10 assists as the Spurs won with some comfort against the Trail Blazers.

The Blazers found a snake in its locker room before the game and seemed rattled in the first half before finding its footing in the fourth quarter, and they closed within eight points with 5:37 remaining.