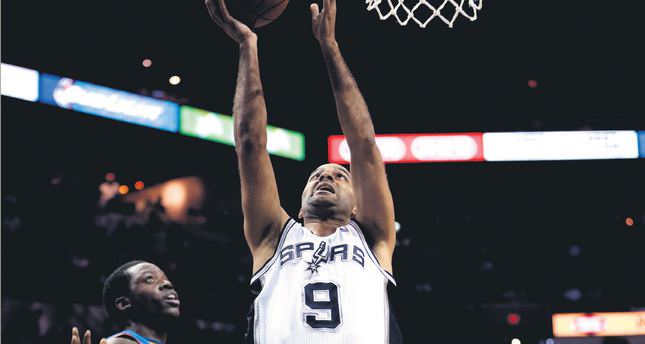 San Antonio can clinch their return to the NBA Finals on the road, where they are the ones taking the beatings in these wacky Western Conference finals

SAN ANTONIO — "This is the craziest series I've ever been involved in," veteran Tim Duncan said. The Spurs took a 3-2 lead in it Thursday night after Duncan had 22 points and 12 rebounds in a 117-89 victory over the Oklahoma City Thunder.

The Jekyll-and-Hyde series continued between the past two Western Conference champions, as the road team has been thumped in every game of the best-of-seven series. Game 6 is Saturday in Oklahoma City. "I have no clue, honestly," Spurs coach Gregg Popovich said of the disparity. "I think every game, it's a different animal. It really is. We talk to our team about that all the time. You have no clue what's going to happen, how a team is going to come out, whether they're going to be lethargic or hold the ball, get 50/50 balls or don't get 50/50 balls." Kevin Durant scored 25 points, but Russell Westbrook had only 21 points and seven assists after finishing with 40 points and 10 assists in Game 4.

Manu Ginobili scored 19 points, Kawhi Leonard and Danny Green each had 14 and Boris Diaw added 13 for the Spurs, who are a win away from returning to the NBA Finals after losing in seven games to Miami last year. The Spurs returned to the style of play that enabled them to win the series' first two games by a combined 52 points. "We gave them everything they wanted," Oklahoma City coach Scott Brooks said. "They got the dribble drive, they got the 3-point line, and they got to the free-throw line."

The Spurs were also 13 for 26 on 3-pointers and outrebounded the Thunder 48-35. San Antonio also limited Oklahoma City to four fast-break points after giving up 21 in Game 4. After losing twice in Oklahoma City by an average of 11 points, San Antonio upped its winning margin in San Antonio to 26.7 points.

Oklahoma City had just 34 points in the second half after scoring 32 in the first quarter. "Our shots weren't falling for us," Durant said. "We've got to stay aggressive and we've got to get stops. When we can't make a shot, we've got to play defense, and we didn't tonight."
San Antonio outscored Oklahoma City by 10 points in both the second and third quarters, allowing both teams to sit their starters for much of the fourth.

Serge Ibaka, who dominated the interior in Oklahoma City, was held to six points and two rebounds.

The Spurs started Matt Bonner in place of Tiago Splitter to draw Ibaka out of the paint and it worked early. It also helped defensively, as Ibaka attacked Bonner but missed his first five shots on a series of running hooks.

Duncan was also able to help defensively, rolling over to block a layup attempt by Ibaka.

San Antonio's crowd was raucous from the start, booing Westbrook heavily during pregame introductions and erupting joyously when Green scored the team's first points on a 3-pointer 1 ½ minutes into the game Oklahoma City withstood the early barrage, going on an 11-2 run for its largest lead of the game.

San Antonio kept Westbrook out of the paint early, but that only opened up the lanes for Jackson, who made his first five shots. He had four straight layups and then drained a 3-pointer with Parker closely defending.