James, Heat bounce back to beat Spurs and square finals at 1-1 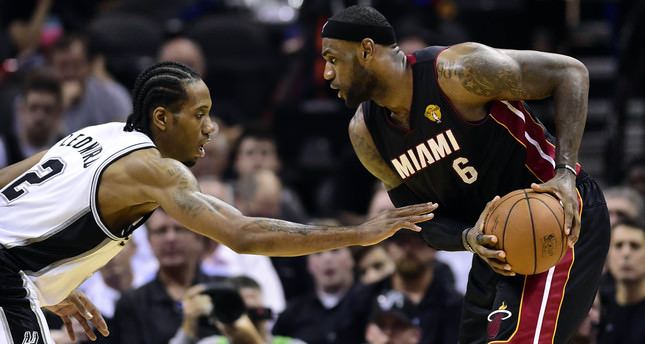 by Jun 09, 2014 12:00 am
SAN ANTONIO — LeBron James was cool after overheating in the opener as the Miami Heat bounced back to even the NBA Finals.

James dropped in 35 points, and Chris Bosh added 18, including a go-ahead triple down the stretch, as the visiting Heat beat the San
Antonio Spurs 98-96 Sunday to square the championship series at one game apiece.

A dehydrated James was forced out of Thursday's 110-95 game with a left leg cramps with 3 minutes, 59 seconds left as temperatures
soared to 90 degrees in sauna-like court conditions at the AT&T Center because of a malfunctioning air-conditioning system in a rematch of last year's finals.

James had plenty of time to recover, and the two-time finals Most Valuable Player rebounded Sunday in comfortable temperatures.

"I didn't try to think about it too much," said James, who also pulled down 10 rebounds. "What happened on Thursday was Thursday. I was just thinking how I'm going to help my team succeed. I wanted to impose my will any way I could."

Heat coach Erick Spoelstra didn't know what to expect from James but was delighted with his effort that included 22 second-half points.

"He's the best player in the game," Spoelstra said "He'll have a response. He has an incredible way of putting his fingerprints on the game in a lot of areas."

"Obviously, LeBron had it going," Wade said. "Tonight, we figured out how to win the game at the end."

Frenchman Tony Parker scored 21 points, Argentine Manu Ginobili added 19 off the bench and Tim Duncan had 18 with 15 rebounds for the Spurs, who surrendered home-court advantage.

"LeBron with the ball did a pretty good job at his end, and we had to be really perfect at the other end, and we didn't," Spurs coach Gregg
Popovich said. "We didn't take advantage of things. We made bad decisions."

The Spurs led 87-85 midway through the fourth quarter but failed to add to it as Parker and Duncan each missed a pair of free throws.

James hit a three-pointer and two free throws to give the Heat a 90-87 advantage before the Spurs knotted it on a Boris Diaw triple.

After Miami's Chris Andersen broke the tie with a layup, Parker splashed in a 3-pointer, putting the Spurs ahead 93-92 at the 2:27 mark.

James then drew two defenders in the lane and spotted Bosh in the right corner for a wide-open triple that gave the Heat the lead for good at 95-93 with one minute, 18 seconds remaining.

"When you have a chance, you take it," Bosh said. "LeBron was unselfish. I had plenty of time to shoot the ball."

Ginobili's pass inside intended for Duncan flew out of bounds, and James split a pair of free throws for a 96-93 Heat lead.

After Ginobili missed a jumper, Bosh found a wide-open Wade with a bounce pass for the game-sealing layup with 9.4 ticks to go.

"That's what Chris Bosh does: He makes big shots for us," Wade said of the go-ahead basket. "And then making the play for me down the stretch was icing on the cake."

Ginobili made a meaningless three-pointer at the buzzer, and the Spurs' had their nine-game home playoff streak snapped.

"We were in a good spot," Ginobili said. "We were right there and let it slip away. Now we are in a tough situation.

Miami hosts the next two contests with game three Tuesday night of the 2-2-1-1-1 series format, which returns for the first time since 1984.

San Antonio started quickly and led by as many as 11 in the second quarter but couldn't hold it. Instead, James warmed up with 11 of his
13 points halftime points in the frame, and the contest was knotted at 43 at the break.

James added 14 more in the third quarter, but the Heat trailed 78-77 heading into the final frame.