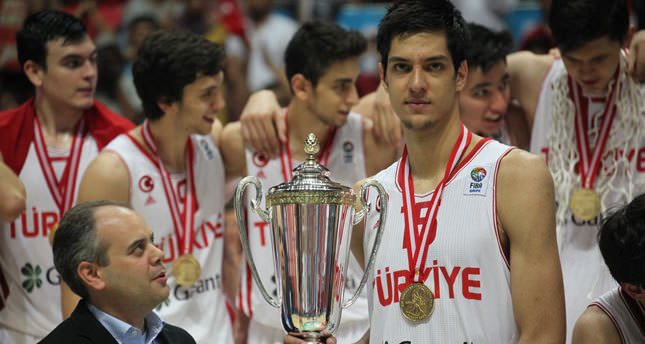 The golden young generation continues to pick up victories on basketball's international stage. Turkey defended their gold medal while also claiming their sixth U18 medal to go along with 2004 and 2005 silvers and bronze in 2009 and 2011. Turkey won the U18 European Basketball Championship after defeating Serbia 85-68 in the final on Sunday night in the Turkish province of Konya. Serbia failed in winning their second U18 title since the split of Serbia & Montenegro, adding silver to gold in 2007, 2011 silver and bronze in 2012. Yugoslavia were the last repeat winners in 1988 and Lithuania were the last home side to take the title in 2010.

It's been 26 years since a team defended their U18 European Championship title and four years since a host nation won the crown in front of their home fans. So, there were dramatic scenes after the buzzer as Turkish players celebrated victory with jubilant fans. The Turkish team received their medals, along with Serbia and third-placed Croatia, from Turkey's Minister for Youth and Sports, Akif Çagatay Kılıç. "I congratulate our national team and those who made effort for them and standing by them with all my heart," Kılıç said. "They honored our country. I believe that our youngsters will achieve many successes with determination and passion," he added. Head coach Ömer Uğurata said: "Twelve players were crowned as champions by leaving their egos aside and sacrificing their priorities." "It's a great honor for me to go to world championship as the coach of European Championship winners," he added. Team captain Egemen Güven, who was selected among the top five players of the tournament, said the Serbia game had been difficult. Praising Serbia for being a tough team, Güven said: "We prepared very well for every single match that's why we won the title. We aimed to be the champions from the beginning of the tournament and I thank everyone supporting us." Serbia had cut Turkey's lead to 45-37 but Turkey used the home crowd support to go on a 17-4 surge for a 62-41 lead late in the third quarter. Serbia would not get closer than 12 points the rest of the way.

Serbia started by drawing three quick Turkish fouls within the first one and a half minutes. But Turkey was better offensively in the early going, pulling ahead 11-3 on Doğus Özdemiroğlu's triple. Serbia called a timeout but Ulubay knocked down a trey of his own as the margin grew to 14-3 halfway through the first quarter. After Ulubay drained another long ball, Korkmaz came off the bench and joined the long ball barrage as Turkey pushed the lead to 23-7 eight minutes into the game.

Serbia closed the gap to 25-11 after one quarter. Serbia worked hard defensively to keep the Turks from scoring and were able to put a further dent in the lead with a Nikola Pavlovic layup and a Danilo Ostojic three-point play to pull the Serbs to within 25-16. But Ayberk Olmaz scored Turkey's first basket of the second quarter and Geçim nailed another Turkish triple for a 34-18 lead - and another Serbia timeout at the 6:13 minute mark of second quarter. The Serbs completely shut down the Turks after that point, giving up just two free throws and Turkey missed their final 10 shots of the first half, allowing Serbia to chop significantly into the deficit, trailing 36-28 at the break following the 10-0 run. Ulubay stopped the drought on Turkey's first trip down the court in the second half. Serbia tried to keep up with the Turks and Vanja Marinkovic's triple had Serbia down 45-37. But spurred on by the strong crowd, Turkey erupted on a 17-4 run in just over three minutes with Korkmaz draining two triples and a reverse dunk for a 62-41 advantage - and a Serbia timeout - with three minutes to play in the third quarter. Gecim made two free throws to up the cushion to 64-41 and it was 68-46 after three quarters.

Serbia tried to chip away at the lead in the fourth and Peno scored seven straight points for the Serbs with his three-ball getting it down to 70-55.
Güven answered with a dunk and Yiğit Arslan nailed a three-pointer as the hosts' advantage had reached 20 points again - 77-57 - with five minutes to play. And Turkey would not let Serbia get any closer than 16 points the rest of the way.