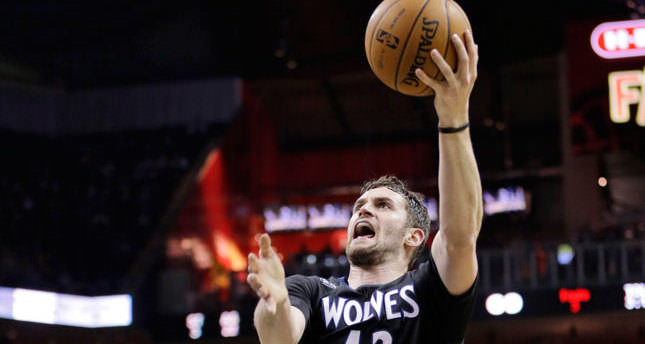 Joining forces with LeBron James and Kyrie Irving, new power forward Love could be the man to push the Cavs to the top

The worst kept secret in basketball has finally been revealed. Kevin Love is now a Cleveland Cavalier and an extraordinary summer for the perennial underachievers has reached its zenith. But creating a winning team isn't just about cobbling together a galaxy of stars. The stars need to fit. When LeBron James, Chris Bosh and Dwayne Wade combined in 2010, they and many others expected the rings to rain on Miami. A traumatic first season was followed by two championships before the San Antonio Spurs crushed the Heat's experiment in a blistering display of basketball from a team espousing the virtues of team ball and squad continuity. The 2014 Cavs can learn a lot from the team that ultimately sent James back to his home state. The core-four group of Anderson Varejao, James, Love and Kyrie Irving gives the Cavs a collection of complementary skills; elite passing, shooting and speed - all of which were key components in the San Antonio Spurs' 2014 NBA championship win.

We know James' game by now and how he can win championships. He can guard all five positions, play in the post, make plays and pass the ball like no one else - he is a one-man defensive and offensive wrecking ball. But as last season showed, he can't do it all by himself. That's where Kevin Love comes in. First and foremost, Love is elite at the three things that James needs around him; passing, 3-point shooting and rebounding. The only major skill Miami lacked during James' tenure was elite rebounding, and now he has the best rebounder in the league in Love. Not only that but Love's 3-point shooting - without sacrificing size - provides ample room for James to operate while Love's quarterback-style outlet passes are perfect for when James gets out in transition.

But where Love really helps is with his post-game. With Wade struggling with injuries last season, James was asked to carry too great a burden, eventually wearing him down and mentally sapping him. Love is used to carrying an above-average offense after his time with the Minnesota Timberwolves, working in pick-andpops as well as consistently drawing doubleteams in the post, where he can use his elite passing to find cutters or his expert shooting to go it alone. Irving will likely carry the bench unit when James sits which also gives Cleveland the chance to rest their superstar as well as run, what should be, deadly pick-and-pops between Irving and Love - the former being one of the best pull-up shooters in the league while Love is probably second only to Dirk Nowitzki in terms of shooting big men. Anyone who watched the Timberwolves last year - and you're forgiven for having not done so -it was easy to notice perhaps the league's most entertaining sequence, which should become a fixture in Cleveland this year.

Love and team-mate Corey Brewer became the most electric fast-break tandem in the league. While Love grabbed the rebound, Brewer would leak out up the court and receive the outlet pass, launched expertly and inch-perfect by Love. The duo managed to successfully pull off this play twice as often as any other tandem in the league.

The mouth waters at the prospect of James, who is arguably the game's premier fast-break player, joining up with Love. As a former American football wide receiver, James is also pretty adept at snatching long balls out of the sky. Pace is key for the Cavs this year, and while Love lacks real pace himself, his passing facilitates a running game. It's hard to see where Love hurts the Cavs. His poor defending is slightly overstated and will almost certainly improve by dint of being on a contending team as well as playing with James - the biggest rising tide in the league who makes every boat rise with him. Perhaps a forgotten hindrance could be his lack of top-level experience.

In his time with the Timberwolves, Love never even sniffed the playoffs, and every player will say that it is a different game once the threat of elimination begins to creep in. Love essentially hasn't played a must-win game in his six-year NBA career. Cavs fans will be hoping his experience with Team USA in their gold medal showings in the 2010 World Championships and the 2012 Olympics will stand him in good stead come the sharp end of the season. The Love trade was no secret. For over a month it was generally accepted the Cavs would be sending No1 pick Andrew Wiggins - a potential superstar - former No1 pick Anthony Bennett and a pick to Minnesota in return for Love. The only controversy was whether giving up a player of Wiggins' potential was a risk. With Love still in his mid-20s, there appears to be no risk at all. The Cavs were contenders from the title the moment James announced his return in Sports Illustrated. Now with Love, they rank only behind the Spurs -James' vanquishers as the favorites
Last Update: Aug 26, 2014 1:57 am
RELATED TOPICS