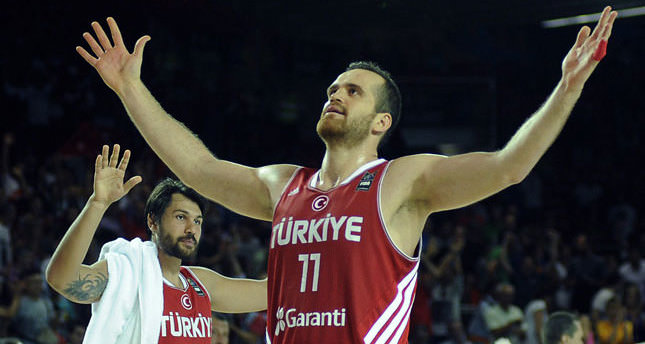 by Kenny Laurie Sep 01, 2014 12:00 am
Turkey rallied by for a hardfought opening day win in their FIBA World Cup Group C match with New Zealand, beating the Tall Blacks 76-73. After suffering in the first half to a rampant New Zealand team, Turkey came back strong in the third quarter before Emir Preldzic put the Turks ahead permanently with three minutes left to go thanks to a 3-pointer from the top of the key. Despite being runners-up four years ago in the FIBA World Cup as hosts, Turkey have gone into this year's edition with lower expectations after star names like Ersan Ilyasova, Enes Kanter and Hedo Türkoğlu pulled out opening the roster for a younger generation. Turkey's only remaining NBA player, Ömer Aşık, played just 10 minutes of the game and missed his only field goal attempt.

Despite their quality, a game against New Zealand would normally be a relatively routine affair but with expectations lower after a miserable warm-up campaign, the win was a valuable one for Turkey who are looking to snatch the second place spot in Group C behind the U.S. Preldzic's crucial 3-pointer with 3:13 left of the game gave Turkey their slim 75-72 lead but it was the team defense won the day as Turkey held New Zealand to just one point in the final three minutes despite taking seven shots from the field, although they needed hot-shooter Kirk Penney to miss a wide-open 3-pointer with just under 10 seconds on the clock before the Turks saw the clock out and secured a valuable win that should stand them in good stead against the lesser power Dominican Republic. Ogus Savas scored 16 points in just 12 minutes for Turkey to top score in a blistering showing for the center.

Preldzic added 14 points. Corey Webster was the game's highest scorer with 22 points, although inefficiency hurt Webster who needed 22 shots to reach his total.

Elsewhere in Group C, the U.S. made short work of minnows Finland with a dominant 115-55 win with Klay Thompson scoring 18 points while the muchhyped Anthony Davis had 17. The Finns battled gamely but were clearly no match for the stacked U.S. squad who were able to give meaningful minutes to every one of their squad members - most notably Derrick Rose, the former NBA MVP who has hadn't played a significant minute of basketball before Saturday night in almost two years. Rose, one of the stars that conquered Turkey four years ago, finished with 12 points in 23 minutes.

The U.S. weren't all highlight plays, their defense was miserly, holding Finland to just two points in the second quarter as the Scandinavian country missed all of their 17 shots from the field. "The ball pressure was great," U.S. assistant coach Tom Thibodeau said. "Challenging shots, finishing our defense, guys being tied together ... it was terrific."More worryingly for the rest of the teams in the tournament, star guard James Harden says there is more to come from his side. "We had a pretty good first quarter but we felt we could take it to another level," said Harden.