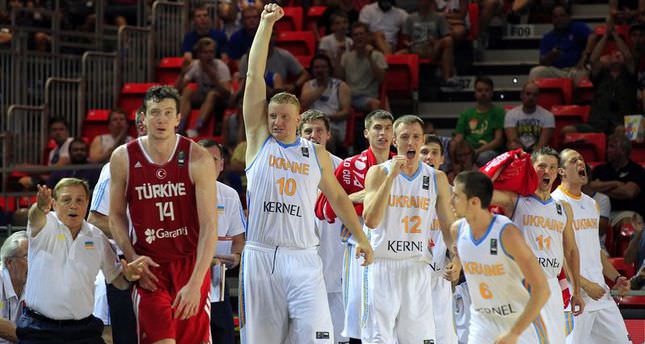 by Kenny Laurie Sep 03, 2014 12:00 am
Turkey missed the chance to take a huge step toward qualifying for the second round of the FIBA World Cup yesterday after going down 64-58 to Ukraine in a close encounter in Bilbao. The Atamans could have all but secured a route to the next round with a win over Ukraine, considering the relative minnows of Finland and the Dominican Republic they are yet to play. Turkey are 1-2 after beating New Zealand and losing to Ukraine and the U.S. Aside from the U.S., who are expected to win Group C easily, the group is still wide open for Turkey who still have a strong shout for qualification. A low scoring game from the start, both sides struggled for points throughout but Ukraine were able to hit the big shots when it mattered most down the stretch, despite a valiant fourth quarter performance from Oğuz Savaş.

Interesting though the first half was, it was punctuated by good defense and equally inept offense. The half time score of 26-25 to Turkey is usually a scoreline reserved for the end of the first period, rather than the culmination of two. Neither side shot over 40 percent from the field in the first half, with Ukraine slumping to a sub-20 percent mark from behind the three-point line. Ukraine's star player Pooh Jeter was one of the worst perpetrators, hitting just one of his six first half jump shots with both Emir Preldzic and Ender Arslan also struggling. Turkey's star center Ömer Aşık was at least able to come out of the first half with some credit, scoring 10 points after just five shots while grabbing 13 rebounds, as well as producing his usual stellar defense in just 11 minutes. The second half carried the same frustrations with both sides needing to employ patience as strangling zone defense forced the two groups of players to force difficult shots from the perimeter.

With the score at a 33-33 stalemate, Ukraine made their first break with a deep three-pointer by Jeter who was then foolishly fouled by Cenk Akyol while he was attempting the off-balance shot. Kerem Tunçeri and Preldzic managed to claw Turkey back before the end of the quarter, giving them some momentum despite trailing 41-39. The momentum didn't last long as Ukraine hit two unanswered baskets at the start of the final period while Turkey struggled in the half court. Big shots by Maksym Pustozvonov and Slava Kravtsov gave Ukraine a six-point lead at 53-47. A three-pointer from Olexandr Mishula with two minutes left put the game out of Turkey's reach at 59-53.