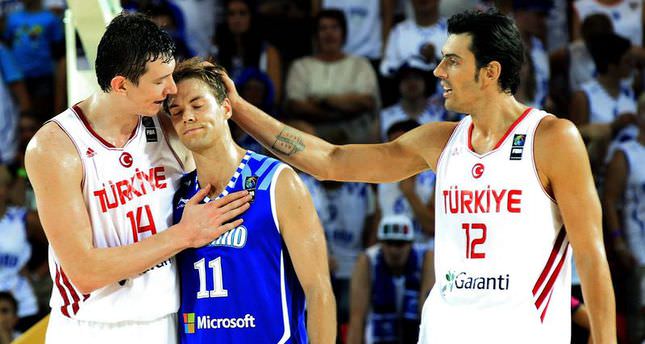 Turkey snatched victory against Nordic team Finland 77-73 in overtime of the 2014 FIBA Basketball World Cup Group C game played in Bilbao on Wednesday. A Cenk Akyol 3-pointer with four seconds left in the game brought the score to 68-68, rounding off a superb second-half comeback and forcing overtime, where Turkey eventually rolled over the plucky Finns. The 27-year-old Galatasaray forward was coy after the game about his huge 3-point shot, despite its potential to snag Turkey a second round spot. "My job was simple. My teammates had done all the work of getting the ball to me. All I had to do was to put it in. I did nothing else," the Galatasaray player shrugged. Akyol's heroics would never have happened had, the otherwise white-hot, Petteri Koponen made a free throw as the clock ticked down.

Turkey grabbed the rebound with Emir Preldzic running the full length of the court, driving to the hoop before dishing out to Akyol who had spotted up in the corner. Encouraging though the second half performance was, the first half left a lot to be desired, especially considering the fact that Finland were allowed entry into the tournament in exchange for free advertising on the Finnish-made game Angry Birds. "We had to change our strategy completely after the first half. We had a very bad first half. Things were just not happening.

And I think they played at a very high level," said Ömer Aşık who led Turkey's scoring with a game-high 22 points along with 8 rebounds. Finland caught Turkey completely off-guard in the opening 20 minutes. Koponen - who finished with 17 points - was red hot from the outside, helping Finland to a 15-10 start in the first quarter.

Things only got worse in the second period as back-to-back 3-pointers from Koponen - a beautiful pull-up shot after lax Turkish defending - and Sasu Salin put Turkey 41-24 behind and almost out of sight. The Turks made ground up quickly in the second half, and when Ender Arslan made it 37-46 with a 3-pointer toward the end of the third quarter Turkey looked to have the momentum.It wasn't until Cedi Osman's corner 3-pointer from Sinan Güler's perfect drive-and-kick assist that Turkey looked to have pulled off a famous comeback, making the score 55-51 with only a minute left of the third period.

With the score at 68-65 with less than 10 seconds to go, Koponen missed his free throw and Akyol embarked on his heroics. Turkey coach Ergin Ataman said: "I think we played two different games in each half. We were much slower than our normal tempo in the first half. "I don't think anybody believed that we could win this game, at half-time," he went on, recalling that Turkey trailed by 14 points going into the locker room break. "There was no choice but to take a risk after that. I think Cedi Osman and Sinan Güler came good for us in this. "We are happy the risk of playing full court continuously paid off. "I think it's a miracle with the kind of statistics we had. It's over now thankfully." Overtime turned out to be a less fraught affair and a picture perfect pick and roll between Arslan and Kerem Gönlüm took the score to 77-73, rounding off a famous comeback. Turkey played the Dominican Republic after the time of print yesterday. In Group C, the U.S. easily overcame an overmatched Dominican Republic 107-71. The U.S. admitted after the game that they had played lethargically, allowing the Central Americans to have more of the early running than they should against such a stacked team. Elsewhere, in a repeat of the 2013 Eurobasket semifinal, Spain got revenge over the French with a dominant 88-
64 win. A year ago France came out on top as they marched on to win Eurobasket, but the French, short of stars such as Tony Parker and Joakim Noah, were unable to deal with the hosts.

The Gasol brothers, Pau and Marc, continued their domination of the World Cup scoring 15 and 17 points respectively as all 12 of Spain's players got on the score sheet. The Spanish, like the U.S., remain unbeaten in the 2014 World Cup.