Turkey through to Last 16 in FIBA World Cup 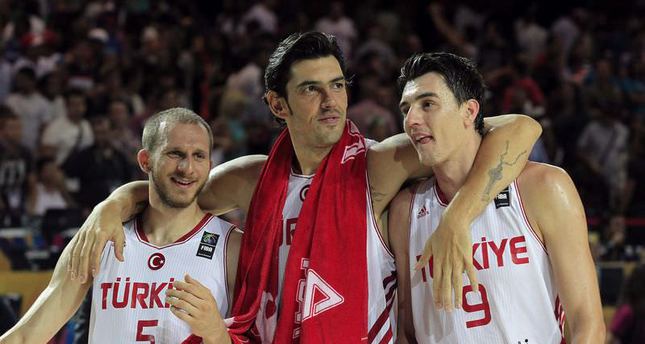 Despite faltering against Ukraine and running it close against New Zealand and Finland, Turkey have advanced to the round of 16 where they will take on struggling Australia, who were accused of losing on purpose to Angola by Phoenix Suns star Goran Dragic, on Sunday.
After some unconvincing performances, the Atamans saved their best for last, dominating the Dominicans from tip-off. More promisingly, the game also saw something of a coming out party for youngster Cedi Osman who played a crucial part in the second quarter 19-4 run that gave Turkey their early commanding lead.

Osman – the recently crowned MVP of the Euro U20 Championships – scored a fast break layup with 48 seconds left of the first half that put Turkey up 39-22. The youngster finished with just seven points, but they all came at crucial times.

Turkey moved the ball better than they had done all tournament while their outside shooters were on the mark from the start, although their 3-point percentage would drop off to a below-average 31.6 percent by the end of the game.Emir Preldzic continued his superb tournament – being arguably Turkey's best player in the competition so far – playing almost as a point forward while Oğuz Savaş ran up a team-high 15 points off the bench.

Veteran Kerem Gönlüm was also key in the early going, helping to push Turkey out ahead early.Sunday's opponents Australia now lay in wait. The Aussies have been disappointing so far, missing star player Andrew Bogut due to injury while recent NBA lottery pick Dante Exum has been worryingly quiet. The men from Down Under suffered an embarrassing loss to Angola on Tuesday night and they finished third in Group D, winning three out of their five games, alongside Lithuania, Slovenia, Mexico, Angola and South Korea. Australia's loss grabbed attention after Dragic of Slovenia tweeted "Basketball is a beautiful sport, there is no room for fixing the game like today Australia vs Angola!! @FIBA should do something about it!"

Australia rested Aron Baynes and Joe Ingles while barely playing NBA duo Matthre Dellavedova and David Anderson. It is believed they preferred to lose in order to avoid USA until a later round.The round of 16 clash will be far from simple. Although Turkey are the higher seed, Australia boast the same win-loss record and have a superior goal average and total points tally. Ergin Ataman's men will be hoping the Australia of Thursday night will show up on Sunday.

Team USA predictably topped Group C after completing a perfect opening round with a 95-71 win over Ukraine. The only down side from the game for the USA was the potential loss of Kyrie Irving to injury."We wanted to be 5-0 and healthy, and I think Kyrie's going to be all right," coach Mike Krzyzewski said, referring to starting point guard Irving and the hard fall he took after slipping on a slick spot on a drive to the bucket inside the final 90 seconds against Ukraine.

Despite USA's dominance, there have been concerns within the camp that they have been starting too slowly, especially against Turkey when they went into the half behind. "I do think it's tough for all the teams to maintain a really high level of play [playing five games in six nights]. I know people expect that from us every second, but overall our team has played well," said Krzyzewski.

Team USA guard Steph Curry told ESPN after the win: "We've gotta start the games a little bit better, with a little more assertiveness, but other than that we've played well. You've gotta remember, we haven't played together that long. This is a brand new team. So every game you gotta stay focused on getting better and getting more chemistry on the court."We've got a great locker room, but trying to translate that to success on the court and knowing where each other's gonna be and how we're gonna win ... we'll get more comfortable as the games go on."