Spain and USA set on a collision course 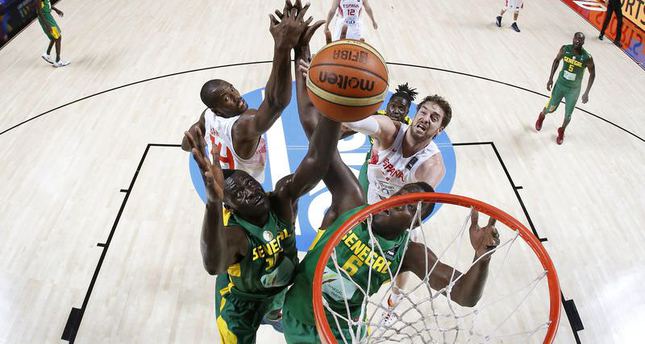 by Kenny Laurie Sep 07, 2014 12:00 am
Spain continued their romp through the FIBA World Cup on Saturday, dismissing Senegal 89-56 to keep up their unbeaten record. While the U.S. remains the favorite for many at the FIBA World Cup, old rival Spain has been the most dominant team in the tournament.

Playing on home soil, the Spaniards are desperate to wrest the world title from the U.S. while hoping to defeat them themselves in the final. Spain won the then-World Championships in 2006 but didn't face the U.S. who bombed out to Greece. After tight losses to the Yanks in the 2008 and 2012 Olympics, they are on a mission to show who is top dog this summer. After emerging from the "Group of Death," Spain had the relatively simple task of taking down Senegal. Pau Gasol continued his MVP-worthy form with 17 points, hitting eight of his 10 shots while brother Marc Gasol was perfect from the field, making all four of his field goals.

Promisingly for the hosts, point guard Ricky Rubio continues to improve in form and his defensive work - he has had more than five steals in his last two games - has become crucial for the Spanish on the perimeter. Naturally, his passing is still as good as anyone's, a fact in perfect evidence when he through a half-court lob pass for Pau Gasol to alley oop in the opening minutes against Senegal. With virtually the entire Spain squad having been together for nearly a decade - and in many case even longer - their passing and movement has become almost telepathic.

Senegal simply couldn't handle the passing of Spain, the only team in the tournament that can boast plus passing in every position from every player. After a routine win, Spain now face France in the quarter finals in a matchup of arguably Europe's best two nations, although France is without stars Tony Parker and Joakim Noah. Elsewhere, the U.S. comfortably beat Mexico 86-63 with Steph Curry stepping up to be the Americans' main man scoring 20 points and making six of his nine 3-pointers. Mexico's Gustavo Ayon - currently playing for a new contract after being released by the Atlanta Hawks - was the game's star turn scoring 25 points. The U.S. will play Slovenia in the quarterfinals. Elsewhere, France beat Croatia 69-64 in a hotly contested game, while Slovenia overcame the Dominican Republic.