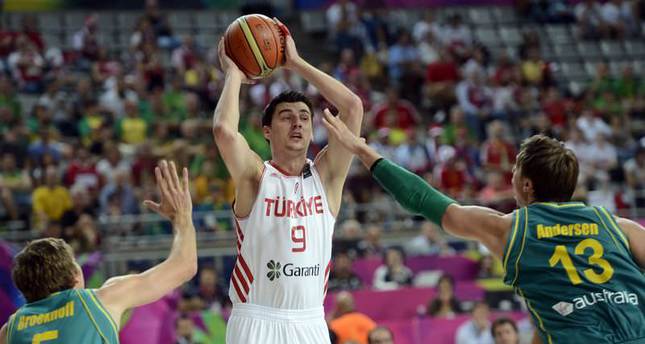 Emir Preldzic is the hero as the Atamans advance past Australia in another nail-biting performance. The forward hit a stunning 3-pointer with five seconds to go to give Turkey a quarter-final date

Emir Preldzic hit a stunning 3-pointer with five seconds to go to give Turkey a 65-64 win over Australia and book a quarter- final date with Lithuania today. Despite being behind for much of the game, at one point being down by as much as 12 points, Turkey pulled off another late salvo to go with last-ditch wins over New Zealand and Finland. Australia had been leading by five points with a minute to go after Cleveland Cavaliers Matthew Dellavedova scored to make it 64-59. The Boomers wouldn't score another point as Turkey dramatically pulled the game back. While Preldzic will rightly take the plaudits - he also hit another deep 3-pointer to get Turkey within two points in the last minute - his first half performance didn't help Turkey's cause. The Fenerbahçe forward failed to score a single point in the first half with all 16 of his points coming in the second half. His 3-pointer with 48 seconds to go came before Australia committed a shot clock violation to give Turkey the chance to grab the late winner.

Following Preldzic's clutch basket with five seconds to go, Australia had the chance for a final possession, but the normally stellar Joe Ingles lost control of the ball and turned it over and handed the win to Turkey. Before then the second half had belonged to Australia. The opening two quarters had been as even as they could be, with Australia marginally the better team. Sinan Güler, who also finished with 16 points, was Turkey's main attacking threat in the first half, attacking the basket at will and keeping Turkey's tempo high when Australia threatened to pull away. Omer Asik's superior interior defense was also a constant thorn for the Aussies. Despite that, the Boomers had an 18-15 first quarter lead and went into the half ahead 35-34. The men from Down Under pressed their advantage early in the third quarter, going on a 13-2 run, playing tough interior defense that Turkey simply had no answer for. When Aron Baynes' emphatic dunk gave Australia a 46-36 lead with four minutes left of the quarter, the Aussies looked to have permanently grabbed the initiative.

Turkey's first run back at the Boomers saw Ender Arslan bring it to within one point with four minutes to go before Australia again pulled away. But for Preldzic's heroics, the Aussies would be facing Lithuania today. While Turkey have lived a charmed life so far, scrapping out improbable wins against Finland, New Zealand and Australia, the real test now begins as they take on a polished - if understrength - Lithuania team. Led by Toronto Raptors center Jonas Valanciunas, Lithuania overcame a stubborn New Zealand team on Sunday, coming out 76-71 winners. Despite being in charge for much of the game after going on a 15-4 run in the first quarter, Lithuania were unable to stop the plucky Tall Blacks from getting back into the game, mainly thanks to the sharp shooting of Corey Webster and Isaac Fotu.

Webster, who was consistently able to spot up on the left shoulder of the 3-point line, even managed to almost single handedly put New Zealand ahead at 59-58 with just seven minutes left of the game. Webster finished with a game-high 26 points, 17 of which came in the second half, but it was Valanciunas's 22 points and 13 rebounds that proved decisive.

Elsewhere, Serbia upset the form book by taking down the previously undefeated Greece in a 90-72 hammering. Normally a strong side, who even made the semi-finals four years ago in Turkey, Serbia disappointed in the group phase, drawing a top seed in Greece. The only teams other than Greece to go undefeated in the groups were the U.S. and hosts Spain. But Serbia, led by Bogdan Bogdanovic, pulled off one of the upsets of the tournament to grab a place in the quarter- finals. Bogdanovic led the way with 21 points while four other teammates finished in double figures. Serbia will take on Brazil in Wednesday's quarter-finals. Brazil enjoyed a huge 85-65 win over Argentina, tipping the balance of power in South America as well as perhaps spelling an end to the great Argentina team that changed international basketball.

After the 20-point defeat, the Golden Generation of Luis Scola, Manu Ginobili, Pablo Prigioni and co that won the 2004 Olympics would appear to be over. Led by Raulzinho Neto's 21 points, Brazil beat their oldest foes for the first time since 1967.