Turkey out of World Cup after loss to Lithuania 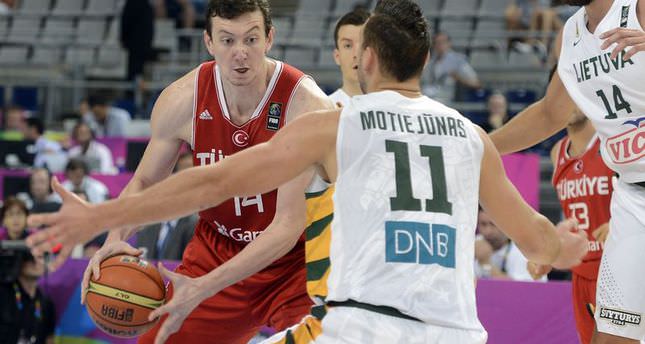 Turkey's rollercoaster ride at FIBA World Cup ended on Tuesday as they went down to the sharpshooting Lithuania 73-61 at the quarter-final stage.
The win sees Lithuania go through to the semi-finals for the second time running as well as marking the first time the Eastern Europeans have beaten Turkey in basketball's flagship international tournament, with Turkey beating Lithuania twice in the past - both in 2006. Despite making a happy habit of overcoming big deficits during the tournament, Turkey were unable to overcome a deadly Lithuania team that were scorching hot from behind the 3-point line, hitting 10 of their first 19 3s despite having hit just one of five attempts in the first quarter. The last minute heroics against Finland, New Zealand and Australia were nowhere to be seen as Turkey failed to make a run late on. The Atamans had started off the better team, racing out to a 18-10 lead on the back of Sinan Güler's knifing point guard play. The Galatasaray guard even managed to fit in a rare dunk after taking Emir Preldzic's outlet pass on a fast break.

The early lead soon dissipated once sixfoot-10-inch(2.08 metres) forward Darjus Lavrinovic found his shooting stroke. The Lithuanian drained three straight 3-pointers to erase Turkey's lead at 24-23. A later 12-0 run from Turkey wasn't enough to break Lithuania's momentum as the Eastern Europeans went into the half with a 33-28 lead. The lead would seesaw in the third period as Turkey threatened another comeback performance.
Ender Arslan's free throws gave the Atamans a 40-36 lead before Martynas Pocius and Paulius Jankunas responded for Lithuania to give them a three-point lead into the final quarter.

Baskets from Renaldas Seibutis and Jonas Maciulis got Lithuania off to a good start in the final period, setting up their comfortable win.
Seibutis topped all scorers with 19 points while Jonas Valanciunas had 12 points and 13 rebounds. Omer Asik shrugged off a flu virus to get 11 points and 10 rebounds while Preldzic had 10 points, and was unable to recreate his heroics from the win over Australia.

Lithuania now face the tall task of playing the U.S. in the semi-final after the latter team beat Slovenia on Tuesday. The U.S. overcame another sloppy start to eventually storm past Slovenia 119-76. U.S. coach Mike Krzyzewski is unconcerned about his side's perpetual slow starts. "We're a young team and that's why I was very pleased with how we handled things today," Krzyzewski said. "Because usually a young team would get really frustrated with the ball not going in [early] and it turned pretty physical. I asked them at halftime, I said I need you to be a mature team. And they were. "We're not this powerhouse or anything. We have good athletic ability. We play hard defensively.

But we're young. And I know internationally especially, it's tough to win young. "I know that from 2006. That's a lesson we learned that the Greek team taught us how to play internationally. And a part of it was to play together, play with veterans and play with poise. And we're trying to get this with a young team." For all the criticism that the U.S. have received for their slow starts and overreliance on their athleticism and offensive rebounding, Slovenia star Goran Dragic believes the U.S. can still challenge hot favorites Spain on their home turf. "They're good, very good,"
Dragic said. "The big guys under the basket ... [shooters] don't have pressure when they shoot because they know they will get second chances. But I think it's going to be hard against Spain. "I'm not saying that [the] USA is not as good a team [as] Spain is. It's probably gonna be who has the best day."