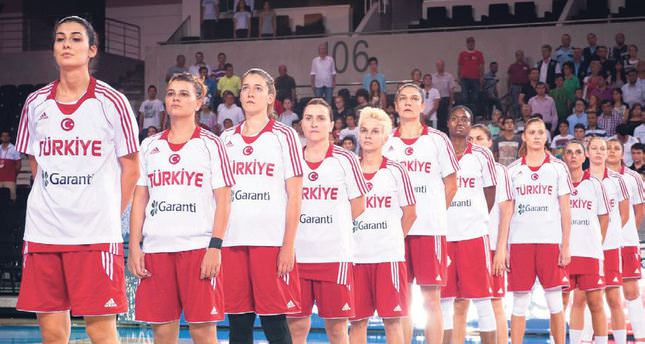 by Daily Sabah Sep 11, 2014 12:00 am
Turkey's Senior Women's National Basketball Team heads to Minsk, Belarus, for an exhibition tournament featuring Belarus, China and Spain. The tournament is the team's final tuneup before the 2014 FIBA World Championship for Women, which will take place in Istanbul and Ankara from Sept. 27-Oct. 5. "Naturally because it's our last tournament we're going to have the opportunity to see our team in its final form," Senior Women's National Team Head Coach Ceyhun Yıldızoglu said.

Turkey will debut at the FIBA World Championship after winning back-to-back medals at EuroBasket Women and a fifth place finish at the 2012 Olympic Games. So far this summer, the team's preparation schedule has featured two exhibition tournaments, the Zafer Cup in Istanbul last month and the Ankara Preparation Tournament in the capital city last week. Turkey posted a combined 6-0 record in those competitions. The squad defeated Australia 84-80 in overtime at Ülker Sports Arena on Aug. 25 to hoist the Zafer Cup. At Ankara Arena last week, Turkey topped Japan and Belarus before beating defending FIBA World Championship for Women silver medalist Czech Republic 61-54 on Sept. 3 to claim another tournament crown. In Minsk, Turkey opens the tournament against China on Sunday. China won bronze at the 2013 FIBA Asia Championship for Women to secure a spot in the upcoming World Championship. On Monday, Turkey faces Belarus, a familiar opponent whom Turkey defeated last week at Ankara Arena 57-40. The Turks close out the tournament against defending EuroBasket Women champion Spain on Wednesday. Following the tournament in Belarus, the Senior Women's National Team returns to Turkey for 10 more days of training before they open the 2014 FIBA World Championship for Women against France in Group B at Ankara Arena on Sept. 27.
RELATED TOPICS