US on top of the world 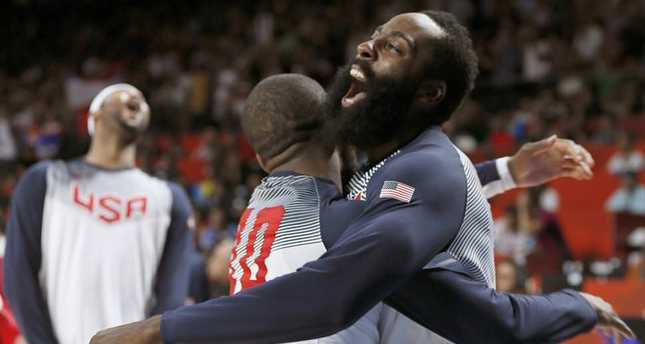 by Kenny Laurie Sep 16, 2014 12:00 am
The U.S. saved their best for last as they won the FIBA World Cup in a hotshooting 129-92 win over Serbia, to give them their fourth straight international title. Rallying behind point guard and tournament MVP Kyrie Irving, the U.S. comfortably dispatched the Europeans, and have now become the first country to win to Olympic titles and two World Cups back-to-back.

The title is also the U.S.'s fifth at the World Cup, putting them level with Yugoslavia as the most successful team in the competition. Sunday's title established the Americans as just the third nation in World Cup history to repeat as champions, joining Brazil (1959, 1963) and the former Yugoslavia (1998, 2002). "It's the greatest feeling in the world right now, [winning] with a group of guys that are my brothers," said Irving after the win. Despite eight players scoring in double figures, Ir ving was the clear standout player, reversing an early eight-point deficit before scoring 15 of his game-high 26 points in the first quarter. Serbia had taken an early lead after Anthony Davis got into early foul trouble before the Serbs hit their first seven shots. Irving's shooting burst pushed the U.S. on a 28-6 run to end the first quarter at 35-21.

The early 15-7 hole that the U.S. found itself in was its biggest deficit of the tournament, but the Serbs wouldn't get close again after the run. Scorching shooting continued throughout the game with Team USA hitting its first five 3-pointers and finished a crucial 15-for-30 from long range. DeMarcus Cousins stepped up in place of Davis and provided key rebounding, rim protection and outlet passing. The big man would finish with 10 points and nine rebounds. "We didn't care who we didn't have," Cousins told ESPN. "We went with the guys we did have and came out champions."

The U.S. wrung double-digit performances out of eight players, with James Harden adding 23 points, underlining the side's team ethos that was fostered after the horrific pre-tournament injury to Paul George. "It was not like there was one star," Krzyzewski said. "[But] they were a championship team and it was kind of cool. In 2010 [against Turkey], [Kevin] Durant just kind of took us.

He had an amazing performance. Team-wise, this is a heck of a team. This was a really good team. "With all the interruptions that we've had, who you think you're gonna be and who you're gonna have and all of a sudden you don't have 'em ... These guys ran a steady race the whole time," Krzyzewski said. "I'm so happy for these players."

The win marks a high point in U.S. basketball, winning four major tournaments in a row for the first time. After Team USA's dismal failures in the early and middle 2000s, the U.S. is firmly back on top of the basketball world again. USA Basketball chairman Jerry Colangelo said, "I said previously [that] if we were to have won this year, with all of the adversity that we went through, [that] this would be the sweetest of all of the [major] championships. And I [still] feel that way. "The amazing thing about all that has happened is that we have used so many different players to win these championships, which is a testament to the game in our countr y and the depth of talent that we have. ... Tonight's performance was like a culmination of all of that development, because we have been waiting for a game where we just blow it out. And that's exactly what happened."
Last Update: Sep 16, 2014 2:16 am
RELATED TOPICS