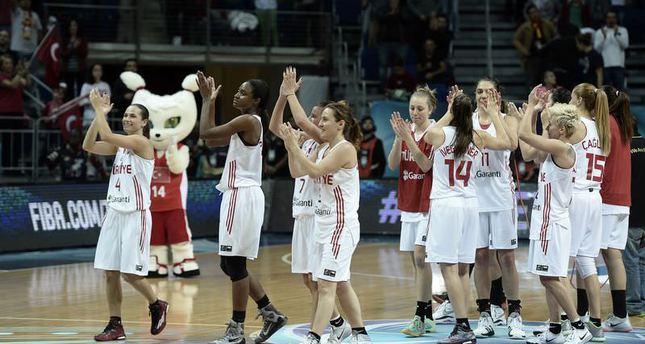 by AA Oct 03, 2014 12:00 am
Turkey, the hosts of the quarter-final thriller of FIBA World Championship for Women, defeated Serbia 62-61 to advance to the semi-finals for the first time in their history.

The game in Istanbul started in Turkey's favor, with a 10-5 lead with five minutes to go in the first quarter. The Turkish ladies, affectionately known as the Fairies of the Net, managed to hold on to their lead and finished the first quarter ahead, 18-13.

In the second quarter, the Serbian women's strong defense and high-percentage shot display paid off and they quickly melted Turkey's lead allowing Turkey only six points in the second quarter. Serbia were ahead 30-24 in the first half.

The Turkish team showed a good defensive performance at the start of the second half. However, Serbia were up 40-31 with three minutes to go in the third, but thanks to power forward Lara Sanders strong inside presence and shooting guard Saziye Ivegin's three-point scoring, Turkey took the lead in the last second in the third quarter, 41-40.

The last quarter was a thriller, as both teams got their shots to fall. Turkey's captain Nevriye Yilmaz started the game with a woeful 14 missed shots, but she pulled herself together in the deciding quarter and got her three consecutive shots to fall to give Turkey a score of 53-47 within three minutes to go.

Serbia started making tactical fouls to hold on to the game, but Point guard Isil Alben's six free-throws during that period were crucial.

Serbia were able to stay in the game with shooting guard Nevena Jovanovic's three pointers cutting Turkey's lead to only two with 56 seconds to go in the game, 61-59.

Small forward Tugba Palazoglu could only hit one of the two free-throws to give Turkey a three point lead, but Serbia's Tamara Radocaj made a mid-range shot with 1.6 seconds to go to make the score 62-61.

Turkey were able to hold on to the ball for the remaining second.

Serbia's shooting guard Milica Dabovic was key for her team throughout the game and scored a game-high of 18 points.

Turkey will take on Spain on Saturday in Istanbul in the semi-finals.

The final quarter-final clash has already started with the U.S. playing against France in Istanbul. The winners of the game will face Australia in the semi-finals.