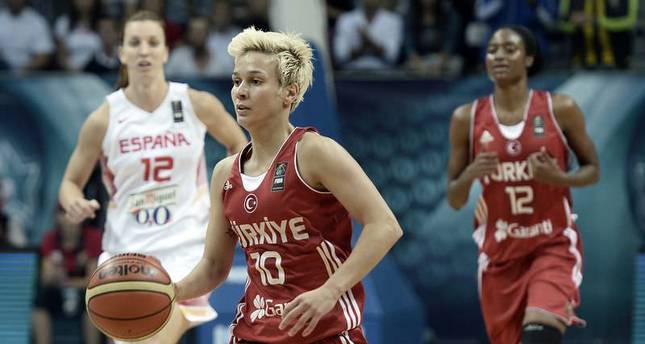 Turkey's women basketball team, also known as the "Fairies of Basket," could not pursue their fairy tale to a happy ending. The game in Istanbul started in Turkey's favor when they ran up a 5-0 lead after the first minute. But Spain came right back with a 9-0 rally to jump ahead 9-5 in the third minute.

Both teams were making their shots, and Turkey finished the first quarter 20-19 ahead, thanks to their power forward Lara Sanders' six points and center Nevriye Yilmaz's five points in the period.

Turkey and Spain showed good defense, but poor offense in the second quarter, and the first basket came from Turkey only in the fourth minute.

Spain was able to finish the half ahead by a single point, 28-27, in a low scoring second quarter when teams combined for only 16 points.

In the deciding quarter, Spain's shooting guard Alba Torrens took over. Torrens scored 12 points in the last period to give Spain a comfortable 14-point lead with four minutes to go in the game.

Turkey could not come back in the remaining minutes and lost the game and the chance to go the final.

Spain's Alba Torrens was the top performer: She finished with 28 points, 6 rebounds and 3 assists. Power forward Sancho Lyttle joined her teammate with a "double-double;" she scored 18 points and grabbed 12 rebounds.

Turkey's Lara Sanders finished the game with 18 points and 6 rebounds, and Nevriye Yilmaz scored 18 points as well in the losing effort.

Spain is waiting to learn its opponent in the final. The USA - Australia semi-final game has already started in Istanbul.

Turkey will play with the losing side of the USA - Australia clash, and will look to take the podium with a bronze medal in their first world championship.