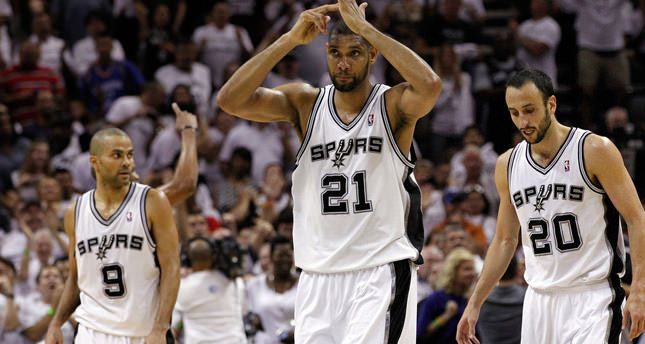 by Kenny Laurie Oct 11, 2014 12:00 am
NBA champions the San Antonio Spurs take on Fenerbahçein Istanbul on Saturday in a much anticipated pre-season friendly as part of the NBA Global Games. The much-anticipated matchup sees the champions of both the NBA and Turkey go head-to-head while the home side will be looking to put their defeat to Pınar Karşıyaka in the President's Cup behind them. The game will also be a chance for Fener fans to see new signings such as former NBA No5 draft pick Jan Vesely, a player who struggled in the U.S. but is a high-flying dunker who should at least be able to electrify fans with his acrobatics. Ahead of the game, the two coaches, Gregg Popovich and Zeljko Obradovic, enjoyed a nice mutual backslapping session with Popovich - widely considered one of the greatest coaches of all time - claiming that Obradovic was capable of coaching in the NBA. "Obradovic is a high level coach. He has the potential to coach any NBA team," the American said, whose ancenstry hails from Obradovic's native Serbia. Flattered though he was, the Serbian wasn't rising to the bait, saying his never plans to go to the NBA and is happy at Fenerbahçe. "My life belongs to Fenerbahçe," said the Serb. "I thank him for these nice words. My life and career belongs to Fenerbahçe and I have no intention of going to the NBA. "The organization is so special and it is very good to be able to play against the NBA title holder ahead of the season." The Spurs, as well as NBA champions, have been hailed over the years for the egalitarian style of play while incorporating a majority foreign contigent - a rare thing even in the modern NBA that has nearly a quarter of its player hailing from overseas. Part of their French connection is Boris Diaw, a former star for the Phoenix Suns who was a contender for Finals MVP last season after the Spurs scorched the Miami Heat in five games. Despite having played regularly against non-NBA competition as a youth, Diaw is looking forward to playing on foreign soil. "It is very exciting to take to the field in Turkey again," said Diaw. "Istanbul has a magic atmosphere. Turks are passionate basketball lovers and I played against them in World Championship, they were just great. "We aim again to be champion in NBA again." The Spurs have already played a game in Europe this preseason, losing to a last-second buzzer beater against Alba Berlin.