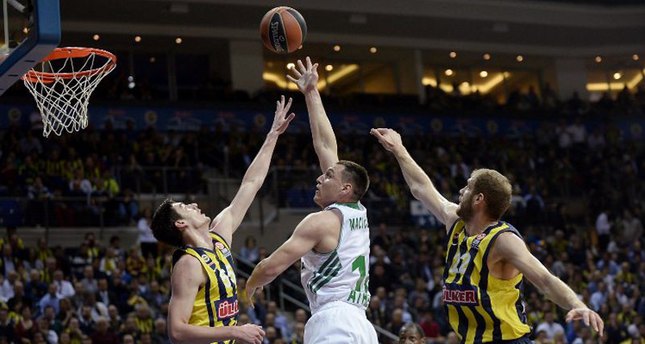 by Kenny Laurie Oct 17, 2014 12:00 am
Coach Obradovic wants to see his new players assimilate while playing aggressive basketball against the continent's best teams. Fenerbahçe coach Zeljko Obradovic will be hoping his summer internationals are sufficiently rested ahead of their EuroLeague opener against Milan today. October is a busy month for Fener, playing two games in two days - today and tomorrow - in the same week that they began their Turkish League season - with a win over Turk Telecom - and played NBA champions the San Antonio Spurs. The Istanbul club has a raft of new players as well as ones returning from the FIBA World Cup who have had little time to integrate ahead of the new season. Obradovic knows it will take time for the team to gel but time can be a difficult thing to acquire during the cut and thrust of a top-level season.

"We have new players," said the Serb. "The thing over here is that some players play for the national team, like Emir Preldzic and Oğuz Savaş for Turkey, and two players from the Serbian national team, Bogdan Bogdanovic and Nemanja Bjelica, you need time to fix everything and day by day they'll play better. "For me improvement is very easy to understand but it takes a while to get to the level of the Turkish league, we need to work hard, and understand that the competitions will be really hard this year. There are a lot of good teams so we have to be ready for that. "They need time, we are the only team in this month that have 11 games including this game, eight games are away, that's a lot of trips but I believe if you have a roster then everybody must understand that they must be ready to help the team." Fenerbahçe can look to the form guide for some inspiration. Despite a loss in the Turkish President's Cup, they can take heart from their 96-90 loss to the San Antonio Spurs, whom they led last in the third quarter, as well as beating Turk Telecom in the opening game of the Turkish League season. With a host of top class talent such as Preldzic, Bogdanovic and Andrew Goudelock - not to mention coach Obradovic - Fenerbahçe have reason to be confident going into the season.

As far as the EuroLeague is concerned, however, Obradovic has humble expectations.

"Our group in EuroLeague is very hard," said the Serb. "Armani Milan, Barcelona, Panathinaikos, Bayern Munich and Turow Zgorzelec are in our group, all of them are champions of their countries. The target is simple, to make the last 16. We have the first game against Milan on Friday, so we need to be ready for that." As well as a clear goal for results, there is also a clear outline of what Obradovic wants of his players this season. Despite a strong performance against the San Antonio Spurs last Saturday, the home side occasionally seemed overawed by the NBA champions. Obradovic said he would not tolerate any deference and called on his players to be as aggressive as possible.

"I believe that we have a good team," said Obradovic. "The important thing is to be aggressive in basketball, keep pushing the opposition, in some situations they look like they're afraid and this is a problem for me. I don't want to see players that are afraid, they must be decisive, even if they make turnovers or make mistakes, this is a game where you make mistakes. Play free and everything will be ok, in daily work you must repeat some things and then you can be like how San Antonio play."

Elsewhere, fellow Turkish sides Anadolu Efes and Galatasaray played after the time of print while the EuroLeague season tipped off on Wednesday when Laboral of Spain beat Neptunas of Lithuania 88-69.