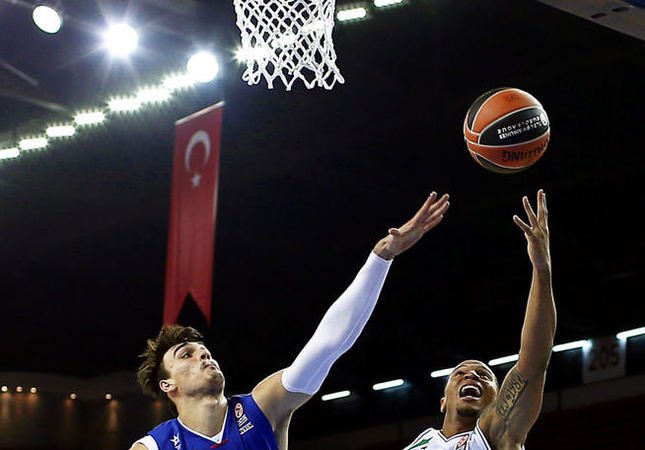 by Kenny Laurie Oct 18, 2014 12:00 am
Despite a strong opening win to their EuroLeague campaign, Anadolu Efes Istanbul center Nenad Krstic told his team-mates they need to improve their game once the tournament hots up. Anadolu Efes Istanbul got their EuroLeague campaign off to the perfect start with an 82-76 win over Unics Kazan while Galatasaray Liv Hospital went down 76-68 to Crvena Zvezda Telekom Belgrade on Thursday night. Former Boston Celtics center Krstic had 15 points in the win that helped them take the early initiative in the competition. Despite a good all-round performance, the Serb believes the team has more still to do.

"There's no doubt that it's always good to start with a win," said Krstic. "Unics Kazan is a strong team with many experienced players. I think we played a good game in general. But we have to improve our game, either."

Anadolu Efes were in charge for much of the game but they still needed a clutch deep 3-pointer from former EuroCup MVP Dontaye Draper to open up an eight-point cushion with four minutes to go. Krstic, Draper and youngster Cedi Osman ran in the show in the first half, helping the Istanbul side to a 45-34 lead at half time. Recent NBA lottery draft pick Dario Saric showed glimpses of what he can do for Efes, scoring in the post early in the second half to set the tone for the third quarter. Anadolu Efes extended their lead by a point by the end of the third quarter, leading 64-52. The away side began to creep back into a game that Anadolu Efes had dominated, and managed to cut the lead to five points with four minutes to go. In a huge possession for the home side, Osman - fresh off his exploits for the national team at the World Cup - passed out of the double team to Draper who made no mistake from downtown to create the all-important cushion. Anadolu Efes coach Dusan Ivkovic claimed he was never in fear of the result, believing his side were the better team from start to finish. "I'm glad that we had a pretty good start to the new season," said Ivkovic. "I think we deserved to win tonight. We controlled the four quarters in general. We knew that Unics Kazan is a very good and experienced team. They opened the season earlier with the qualifying round and got in good shape. They have really good individual players. We started the game well but then lost the control in some moments. We had some weird turnovers especially in the last quarter and missed some open shots. But generally I'm happy the way my players did tonight. Of course we have some a lot to improve. We will keep on working on those things." In Serbia, Galatasaray suffered a tough loss to strong Belgrade side backed by a raucous crowd. Despite an early first-quarter lead, the Istanbul side were second best for much of the game against a smart team that took their chances and successfully cracked Galatasaray's zone defense. Ergin Ataman, who enjoyed a fruitful World Cup when coaching Turkey, was unable to get his players to pull off the heroics the national team managed in the summer. The coach alluded to his players being intimidated by the rampant Serbian crowd.

"Congratulations to Crvena Zvezda and its supporters for a really great atmosphere," said Ataman. "They were aggressive and we had problems to stop Boban Marjanovic under the boards and playing against Marcus Williams in isolation and transition situations. The key was their mental strengh. They were ready to give everything on court. Our matchup zone defense was good. We had fast break and transition points in the second half but it was not enough to return to the game. This was a bad night for us but the good thing is that we lost with by eight points."