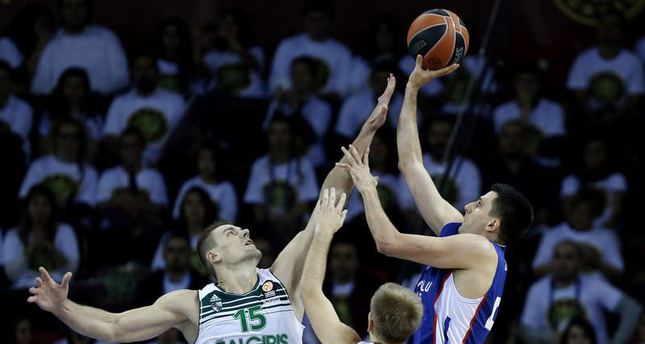 Fenerbahçe and Anadolu Efes picked up their first defeats of the EuroLeague season on Thursday as the duo went down to Panathinaikos and Zalgiris Kaunas.

After perfect starts to the 2014/15 EuroLeague season, the two Turkish clubs suffered against two of Europe's better sides.

Anadolu Efes can console themselves that they only lost by three points while Fenerbahçe will be left licking their wounds after being thumped by 18 points by the Athens team.

Falling behind early in the game, nursing a 12-point deficit by the end of the first quarter, Fener were second best for the entire game. They do at least have the accuse that Panathinaikos enjoyed a historic night.

The Athens side tied a club record with 18 3-pointers made in the Group C game while Dimitris Diamantidis became the first player to reach 1,000 career assists in the Euroleague. He finished the game with 10 assists, which is one short of his career best.

Fenerbahçe coach Zeljko Obradovic could only applaud the victors after the game.

"First of all, I want to congratulate Panathinaikos for their outstanding game and especially the amazing shooting percentages," said the Serb. "This is basketball and if you want to win, you have to put the ball in the basket."

Despite his words of congratulations for the scorching-hot Panathinaikos, Obradovic didn't let his players off the hook.

"Our defense was a real catastrophe and we didn't take advantage of the 14 more possessions we had. Panathinaikos scored 59 points in the first half because our defensive plans didn't work," said the Fener coach. "We are in the beginning of a big effort, but we have a lot of ups and downs ahead of us. The coach has to take the responsibility and protect his team and every single player. It is my responsibility because I selected these players and I have to work with them."

The first quarter saw all the damage that was needed. Fittingly, the first basket of the game came from Diamantidis's 1,000 assist, setting up A.J. Slaughter who drilled the 3, setting the tone for the game. Two baskets from Esteban Batista and a 3-pointer from Antonis Fotsis forced Fener into a timeout as they sat 11 points behind the Greeks at 21-10. The baskets kept coming as the hosts took a 31-19 first-quarter lead.

From there, Fenerbahce just had too much of a mountain to climb against a team that could barely miss. Despite the quality of the opposition, Obradovic was dismayed at the lack of fight in his players.

"You know my philosophy and you know that I always had fighting teams," said the Serb. "The key point is to fight for every ball. I will try to change some things, but to be honest I feel shame for the image of Fenerbahce Ulker in front of this crowd. I also feel shame because our fans set a new tickets' record this season and we disappointed them. Maybe it is a matter of tradition. Fenerbahçe Ulker has won six national championships and Panathinaikos has 34, so it is a big difference between the two clubs and that was a factor tonight."

Elsewhere, Anadolu Efes were beaten late on by Lithuanian side Zalgiris Kaunas 65-62. The Turkish side had been behind by as much as 12 points in the third quarter before pulling close late on. Baskets from Nenad Krstic, Dontaye Draper and Cedi Osman put Anadolu Efes just two points behind at 62-60 in the final minute but Draper committed a turnover down the stretch and the Lithuanians picked up the win after free throws.

"It was a head to head game tonight," said Efes coach Dusan Ivkovic. "The rhythm was so slow. Honestly, Zalgiris Kaunas controlled the game much more than us. We could only make two assists in the first half plus eight turnovers, which is not suitable for a team like Anadolu Efes. It was a different team on the court compared to the games against Tofas and Dinamo Banco di Sardegna. We only scored 62 points. Nenad Krstic did a good job with his experience and showed his quality. This was not our real face, especially at home."