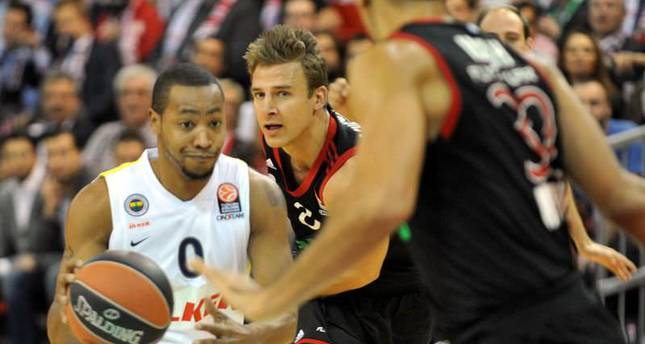 Andrew Goudelock broke the EuroLeague record for 3-pointers made in a game as he led Fenerbahçe to an impressive 93-86 win away at Bayern Munich.

After a slow start, the Istanbul side kicked into gear in the second quarter behind Bogdan Bogdanovic and Goudelock's 3-point shooting, combined with Jan Vesely's perfectly timed cutting as well as some superb second-half defending, to ensure Fener's break out of their two-game slide.

As well as the win, Goudelock can take a proud place in EuroLeague history, rising above Saulius Stomberg's nine 3-pointers made back in 2001, a record now-Brooklyn Nets star Mirza Teletovic and Thomas Kelati have since tied.

The American missed just three 3-point attempts all night as he scorched the Germans with his historic performance.

Fenerbahçe coach Zeljko Obradovic had nothing but praise for his sharp-shooting team and spoke of his happiness at getting back to winning ways.

"We knew that they were very aggressive in offense and defense, so we tried to prepare ourselves," said the Serb. "The key to the game was that in the second and third quarters we changed our defensive attitude and it was much better. We found a way to win this game, an important game for us. Congratulations to my players, it was an excellent night shooting from three, especially Goudelock who had 10 for 13. That's not normal at all; we talk about taking the threes in practice and I don't know if it was because of that or motivation, but we shot excellent from three tonight. I also want to congratulate Bayern for a good game. I know one of their main players, Anton Gavel, was injured tonight, so I wish him a speedy recovery."

The away team fell behind early with Bayern scoring in the opening minutes as they aggressively went after Fener, who kept only Kenan Sepahi in the starting lineup after the defeat to Barcelona last week.

A Vesely cut made sure Fener didn't fall too far behind in the first quarter, making the score 22-19 after 10 minutes.

Then the shooting barrage began. Bogdanovic opened the quarter with two straight 3s - even getting fouled during one attempt before hitting the free throw - before Goudelock hit back-to-back triples. A Vesely three-point play gave the Istanbul side a 39-31 advantage. More high-flying antics from Vesely and another pair of Goudelock 3s gave Fenerbahçe a 50-44 half time lead.

Three more 3-pointers early in the third quarter fell for Goudelock, opening up a 10-point lead, a gap the Turkish team would more or less maintain for the rest of the game.

A 3-pointer from the right side early in the fourth tied the record for Goudelock before sinking the historic triple midway through the final quarter.

A Vesely dunk put the perfect full stop on a near-flawless performance from the Istanbul team.

Bogdanovic, who had 18 points and seven assists, said, "We had bad luck against Barcelona. In this game, they had a chance to come back and win, but we stayed focus until the end and played good offensively. Also we made a lot of threes. We had a problem with 3-point shooting in the last couple of games, but it was better tonight. Of course, it's an important win because everybody knows you have to go step-by-step through this competition. This was just a step for us towards the Top 16."

Fenerbahçe now sit in third place in Group C with a 3-2 record.

Elsewhere in Turkey, Galatasaray slipped to a 2-3 record after getting humbled by Olympiacos Piraeus 93-66.

"Congratulations to Olympiacos for their win and the great basketball they showed tonight," said coach Ergin Ataman. "Although the final 27-point margin is not the real difference between the two teams, the deserved to beat us. We were very soft at both ends of the court, made too many turnovers and lost control of the game very early. It was a really terrible game from our side, while Olympiacos had an excellent performance. We had an opportunity to fight, but they came back big and charged a big run."