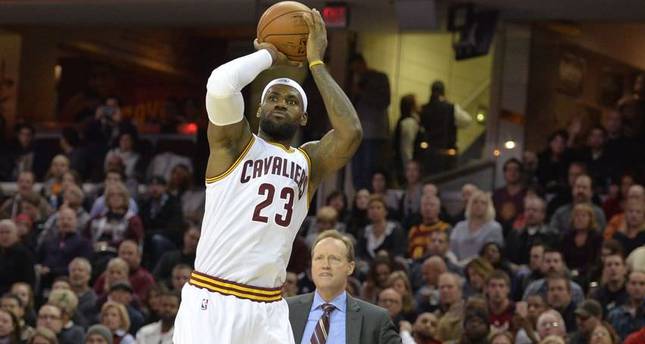 by Associated Press
Nov 17, 2014 12:00 am
LeBron James scored 32 points and the Cleveland Cavaliers made their first 11 3-point attempts, including nine in the first quarter, to rout the Atlanta Hawks 127-94 on Saturday night. The Cavaliers became the first team in NBA history to go 9 for 9 or better from behind the arc in a quarter, according to information provided to the team by the Elias Sports Bureau. James hit three 3-pointers in the period, while Kevin Love and Joe Harris had two apiece. Cleveland, which rallied from a 19-point deficit in the fourth quarter to beat Boston on Friday, needed no dramatics this time. The Cavaliers, who have won four straight, scored 41 points in the first quarter, including 11 by James in the opening 3:34. Paul Millsap scored 16 points for the Hawks, whose four-game winning streak was ended. James, who didn't play in the fourth quarter, was 13 of 20 from the field. Kyrie Irving added 20 points and six players reached double figures for Cleveland. In Sacramento, DeMarcus Cousins had 25 points and 10 rebounds, helping the Sacramento Kings beat the San Antonio Spurs 94-91. At Memphis, Tennessee, Marc Gasol scored 23 points, Zach Randolph added 17 points and 22 rebounds, and the Memphis Grizzlies beat the Detroit Pistons 95-88. At Chicago, A.J. Price, Luis Scola and Solomon Hill all scored 21 points, and the injury-plagued Indiana Pacers beat the Chicago Bulls 99-90. Chris Paul scored seven of his 32 points in the final 2:56 and had nine assists, Blake Griffin added 19 points, and the Los Angeles Clippers beat the Phoenix Suns 120-107. DeAndre Jordan finished with 18 rebounds and 12 points for the two-time defending Pacific Division champions, who were coming off a loss to the NBA champion San Antonio Spurs. Spencer Hawes had 14 points and eight boards off the bench. Reserve Gerald Green scored 26 points for Phoenix and was ejected with 1:57 remaining after picking up his second technical foul. In other games, the Dallas Mavericks beat the Minnesota Timberwolves 131-117, the Washington Wizards downed the Orlando Magic 98-93 and the Golden State Warriors beat the Charlotte Hornets 112-87.