Efes march on in EuroLeague 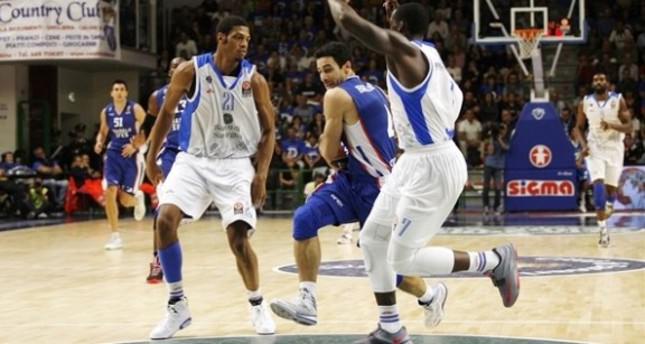 by Daily Sabah Dec 01, 2014 12:00 am
Anadolu Efes picked up a dominant 85-62 win over Dinamo Banco di Sardegna Sassari as they continue their charge into the Last 16 of the EuroLeague. A supreme opening half set up the foundation for a comfortable win with Dario Saric and Milko Bjelica starring early. Efes dominated in almost every area - except for blocks, where Sassari put on a stunning show with some hugely athletic plays from Shane Lawal - with the Istanbul side hitting exactly 50 percent of their 3-pointers, with an impressive 22 makes on 44 attempts, as well as cleaning up the glass, grabbing 52 rebounds to Sassari's 36. Efes enjoyed a 12-0 run in the first quarter to open some early daylight before uncorking a 15-0 run in the second quarter to essentially seal the game before the half time buzzer. The convincing scoreline allowed Efes to give valuable minutes to youngsters Cedi Osman and Furkan Korkmaz who were able to combine for 19 points. Efes coach Dusan Ivkovic praised his team and was happy to see some of his team's young stars getting in the mix. "There are big differences between the teams on the paper," said Ivkovic. But on the other hand, the weaker teams are doing a great job and beating stronger teams. We played really well. I'm satisfied with the performance of my players. But tonight, as an underdog, Dinamo Sassari did a better job on the offensive boards and steals. Our goal is to reach the Top 16. And tonight we came closer to our target. We are suffering from injuries. We have three injured players and that is damaging our rotation. But we have young players who are also doing well. I can say that we are showing signs for the future of becoming a better team." Furkan Korkmaz said, "We desired to win the game so much. We won and strengthened our chance to make the Top 16. We had a balanced game. And everybody contributed. We hope to win the rest of the games in the group." Elsewhere on Friday, Galatasaray picked up an unwelcome defeat to Valencia Basket, harming the team's chances of moving onto the next phase. Gala are now 3-4, a record that should still see them through but the Istanbul team will be disappointed at losing to a team that had only won one game prior to tip off. On Saturday in the Turkish domestic league, Trabzonspor beat Tofas 93-80 while Pınar Karşıyaka humbled Royal Halı Gaziantep 81-65. Beşiktaş won 80-66 in an Istanbul derby with Büyükşehir Belediyespor while Darüşşafaka beat Olin Edirne comfortably, 90-66.