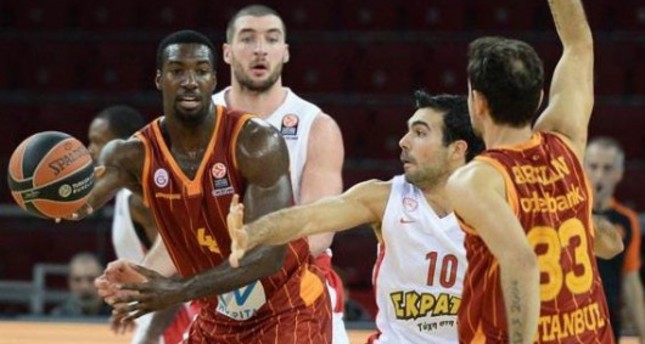 Stars align for Yellow-Reds as they qualify for the Top 16 after overcoming Olympiacos, while Anadolu Efes fall to heavy defeat against Real Madrid

Galatasaray coach Ergin Ataman said his side pulled off a "miracle" on Thursday night as his side progressed to the Top 16 after defeating Olympiacos Piraeus at home, while Valencia Basket beat Neptunas Klaipeda. The odds were stacked against Galatasaray going into the game with the Istanbul team playing a side that were 8-1 before the game and who eventually won the group with ease. More than that, bottom of the group Valencia Basket faced a tough task against Neptunas Klaipeda, a task they thoroughly completed, routing the Lithuanians 103-65, condemning Neptunas to an early exit.

Olympiacos were, predictably, a tough nut to crack. Gala was never able to open daylight, and the visitors were able to go in the break with a two-point lead. Gala came on strong in the third quarter and was able to have a 57-50 lead going into the last quarter. Big shots from Ender Arslan and Martynas Pocius, as well as a dagger-fast break jump shot from Carlos Arroyo secured the win.

Now that qualification is secured, Ataman is looking to push on beyond the Top 16.

"I am very happy, of course," said Ataman. "It is a historic, miracle result for us with this roster. So now, I think that our board and president will help us to build a team again for the Top 16.

"We will try to be as successful as last year and make it to the playoffs. Congratulations to all my players, they put in a great effort tonight. This is a big club, one of the best in Europe. I think that our fans will help the club make an effort, and we will get two more players for the Top 16. We will fight against everybody."

Gala caught the Greeks off guard early on, running out to an 11-0 lead with Arroyo scoring nine in the run. Catching the group winners off guard was very much part of Ataman's game plan.

"To win under these circumstances, we had to play different basketball with a different style," said Ataman. "We were preparing for this since yesterday evening. We tried different defensive approaches during the game. We tried the 1-2-2 zone, and we played the 2-3 zone with the switch to man-to-man after the first pass. We stayed in front of Spanoulis with our centers. We made them confused by switching regularly. Everyone thought that Patric and Kerem would play 25 minutes together. Our opponents thought that as well. We confused them by using Micov at four. Arroyo played a great first half. In the second half, everybody played great. Everyone contributed. I congratulate all our players."

Arroyo led all scorers with 24 points, while Patric Young had 13 points on just five field goal attempts. The American was a huge presence down the stretch and gave Gala some hope after losing star big man Furkan Aldemir to the Philadelphia 76ers. Young credited the win to coach Ataman.

"I think credit goes first to our coach," said Young. "With the little roster that we had, he just came out with a great scheme defensively and offensively. The guys bought into the system. We did a great job making them turn the ball over, stayed together, fought through adversity and came out with a win. Obviously, we are going with the mindset to win it all - and you cannot win it all without winning one game at a time, making sure you start preparing to be a champion every single day. It is going to start in practice and once we start doing things the right way, anything is possible."

Elsewhere, Anadolu Efes was on the wrong end of a 90-70 humbling away to Real Madrid in a dead rubber fixture, as they were unable to recreate their dramatic home win. Efes qualify for the next round in second place.

"If there is a team that deserved to win tonight, it was Real Madrid," said Efes coach Dusan Ivkovic. "They were the best team and managed to keep a high rhythm for the entire game, which allowed them to reach 90 points and 22 assists. We played an okay game and did well throughout the regular season, but we didn't play good defense tonight. I cannot be happy with it. We have to bounce back before the start of the Top 16 and have to learn a lot from this game. This is the Euro League, so I won't talk about injured players. I have to prepare the players I have available and try to make them give their best."