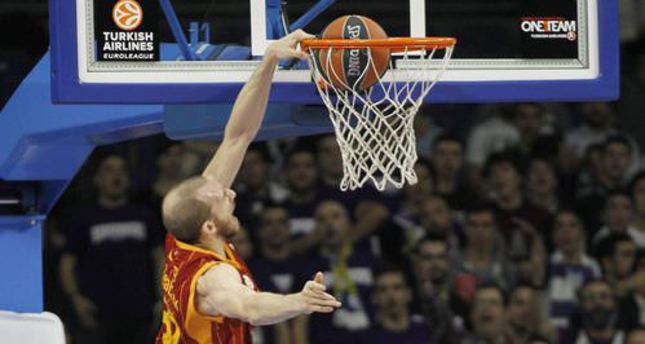 by Kenny Laurie Jan 10, 2015 12:00 am
Galatasaray's star point guard Carlos Arroyo blamed his team's bench for their resounding 93-78 loss to Real Madrid in the Top 16 of the EuroLeague on Thursday.

The defeat was Gala's first loss of the Top 16, and while the Istanbul club was likely to struggle away at one of Europe's powerhouse clubs, Arroyo pointed the finger at the bench's "really bad game" for the loss.

Going into the early stages of the second quarter Galatasaray were actually briefly ahead, but a sudden collapse saw Real Madrid go on a 13-0 run from which they would never look back.

Although Arroyo thought Madrid deserved the win, he couldn't hide his disappointment at the bench's weak performance.

"We had a good start, playing good on offense in the first quarter," Arroyo said. "Our starting five had a successful start, but when they got tired, our bench players had a really bad game. I couldn't switch players every two minutes and the game went away from us. Congratulations to Madrid for this win. We improved in the third quarter when our main players returned. We got a lot of open shots, but did not hit them all. Madrid was the fair winner."

The opening quarter was a tight affair with Galatasaray more than holding their own. The two sides went toe-to-toe as each team struggled to pull away from the other. The hosts took a slim 25-24 lead into the second period.

In the second quarter, Zoran Erceg hit a 3-pointer to give Galatasaray their only lead of the game at 27-25. But Andres Nocioni and Marcus Slaughter quickly kicked into gear, opening out a 13-0 run that put Real 38-27 up and well in control. The hosts went into the half with a commanding 55-39 lead that was never troubled for the rest of the game. Galatasaray were unable to even bring the score within single digits for the rest of the game, although the margin never got over 20 points, lending credibility to Arroyo's view that Galatasaray could have got something from the game had they not suffered a second-quarter collapse.

Galatasaray coach Ergin Ataman blamed his side's lack of defending for the result and stopped short of saying that the game was solely lost in the second period.

"The key to this loss is that we played poorly. We cannot win if we don't play good defense. I couldn't tell if the game went away in the second quarter, but I can tell we didn't play well during those 10 minutes. One of the problems we have right now is that we brought in new players and they have to adapt and learn certain things. It is a process and it takes time," Ataman said.

Of course, from Real Madrid's side, they acknowledged the importance of the second quarter on the game's final outcome but instead of crediting Gala's weak bench, they looked to their own solid play from their veteran core.

Real Madrid coach Pablo Laso said, "We played a great first half and I am happy about it. The game was different in the second half, but we had some good minutes on defense and managed our lead very well. It was a dangerous game because Galatasaray have a lot of good three-point shooters. I am happy for our 2-0 start in the Top 16. I have 13 players on the team who rotate depending on our needs. I always finish the game unhappy for not giving the chances everyone deserves."

Galatasaray now sport a 1-1 record after two games while Real Madrid have won both of their Top 16 clashes.