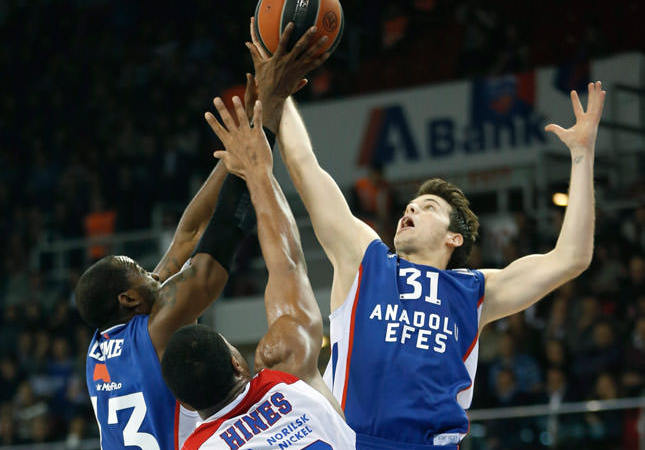 Despite being the better team for much of their clash with CSKA Moscow, Efes crumbled in the important minutes to lose to the EuroLeague’s form team

Anadolu Efes coach Dusan Ivkovic said he expected more from his team after their 78-69 loss to CSKA Moscow on Thursday night. Although Moscow remain unbeaten throughout the entire EuroLeague season and are currently a hot favorite to win the tournament, Efes had the chance to dish their opponent's first defeat only to stumble in the big moments.

Nando De Colo was in superb form for the Russians, bobbing and weaving his way through a resolute Efes side that were unable to take their chances when they arrived.

Whether it was confidence or habit, CSKA simply made the plays when they needed them most while Efes had a frustrating habit of turning the ball over or missing simple shots during the game's crucial stages. Two stand out moments for Efes were during third-quarter runs when Dario Saric and Dontaye Draper turned the ball over on two key fast breaks while Stratos Perperoglu missed an easy layup. Moscow made no such mistakes with De Colo clutch under pressure while Aaron Jackson was impossible to stop off the dribble.

"It was one game where I personally expect much better from my team," said Ivkovic. "I was hoping that my team would play better today. We played well in the first quarter but it was not enough. If you play against a team like CSKA, you should want more, keep control of the game and play better defense. CSKA has a lot of experienced players, and today our defense was not at the best level. CSKA has a lot of talent and shares the ball. We are in the middle of January and have plenty of time to get better. CSKA was the best team tonight and deserved to win this game. The key problem was our one-on-one defense, something strange, at least at Euroleague level for so many baskets from one-on-one situations. We have to work on that and for sure to improve that part of our game. We missed so many easy baskets, there was one big opportunity to take the game but tonight CSKA was better and that they deserved to win."

Efes could hardly have asked for a better start against the form team of Europe. Despite early scrappy play from both sides, with both teams struggling to get anything in a clogged paint while committing a lot of messy fouls, Efes boasted an 18-8 lead with 41 seconds left of the first quarter. The lead would be cut to seven by the end of the quarter. Good though their play might have been, Efes could count themselves lucky in the opening period thanks to some favorable refereeing decisions going their way. A Draper turnover after a bungled dribble somehow saw the ball returned to Efes while Saric opened up the aforementioned 10-point lead after Stephane Lasme cleared pushed a Moscow player to win an offensive rebound. Moscow also didn't have a single trip to the free throw line in the opening period. They would make up for it in the second quarter. Efes would routinely keep the Russians at bay with Thomas Heurtel, Nenad Krstic and Milko Bjelica all playing their part but CSKA showed their championship mettle to somehow end the first half ahead by two at 34-32 thanks to a basket-and-foul from Jackson before Kyle Hines scored a layup to give Moscow their first lead of the game just before the buzzer.

The third quarter exhibited all the intensity that made the fixture such an anticipated event. CSKA Moscow pulled out to a 43-34 lead and could have stormed off only for Efes to slowly claw their way back on the back of a rousing elevation in noise from the Efes faithful. Big plays from Dario Saric and Stratos Perperoglu brought them level at 49-49. Eyes could have gone further but Saric's no-look pass on the fast break fooled even his own team-mates while Perperoglu blew an easy layup. The intensity of the situation appeared to affect the hosts more than the visitors as CSKA held their nerve to into the final period ahead at 54-51.

De Colo and Jackson drained big baskets to give Moscow the all-important breathing space at 59-53. A slick swirling team set by CSKA saw Pavel Korobkov grab the basket and the foul to give CSKA a 62-55 lead, simultaneously sucking the air out of the Abdi Ipekci Arena with five minutes left.

Dontaye Draper would reignite the tie and the crowd when his 3-pointer made the scores 66-64 but a technical foul on Heurtel gave De Colo three free throws to open a two possession lead before Milos Teodosic nailed his only 3-pointer of the game to secure the tie.