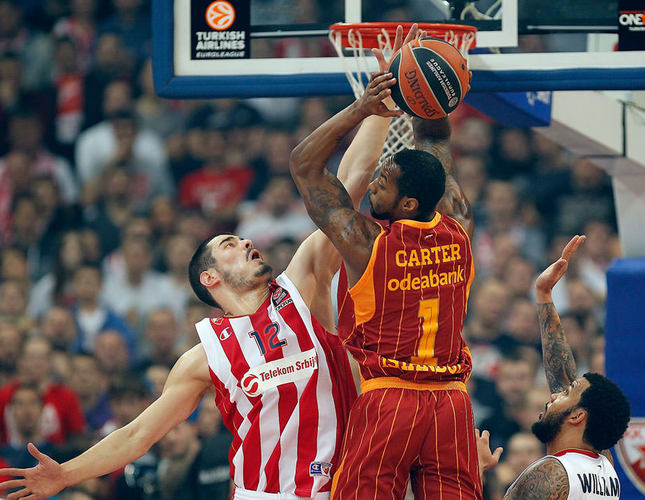 Amid heavy security and a fiery atmosphere, Galatasaray left Belgrade with a valuable win and their pride. Coach Ataman said security around Belgrade was similar to that of President Obama

Galatasaray coach Ergin Ataman said he felt like U.S. President Barack Obama when he entered Belgrade for his side's heated clash with Crvena Zvezda on Friday.

The Yellow-Reds came away with a valuable win but more importantly came home in one piece. The tie was a significantly heated one after a Belgrade fan was murdered by a Galatasaray fan before a game earlier this season. With many of the locals seeking at least an approximation of revenge, Galatasaray entered Serbia amid a huge police presence. The Istanbul side were able to hold their nerve to take home a valuable 74-65 win, breaking an away losing streak that dates back to last season.

After the game, Ataman said his players could hold their heads high after the win and that the security detail that followed his side around Belgrade was similar to that of Obama's.

"Under whatever circumstances you are in, the game has to be played on the court," Ataman said. "As soon as the game began, we concentrated solely on it. The pressure from the spectators triggered our motivation further. We crushed the rivals. They thought they were able to drown us, but they realized that it was never going to happen and they panicked and we won."

Ataman added, "Even Obama has never been escorted with so much protection. We were not worried before the game. We were met with unprecedented safety measures in Belgrade, and about 50 guards encircled us. There were nearly a thousand police officers at the airport and they closed the highways. All eyes were on me during the game. The reactions against me did not take so long. There were no insults or swearing."

On the court, Galatasaray played to a level they have rarely hit this year against one of Europe's toughest teams.

As ever, Carlos Arroyo was at the center of everything good for the team. Although the former Miami Heat guard scored just 11 points, he hit an all-important 3-pointer with two minutes left to make the score 59-69, all but killing off the game. Two runs in the third and first quarters helped seal the win for the visitors, with an 8-0 run early on setting the pace of the game before a 12-2 run in the third quarter put them in control. Ataman was so confident after the win that he was prepared to say that qualification from the Top 16 "would not be difficult."

With the Belgrade faithful known for their hostility, Friday's atmosphere was a particularly difficult one to navigate.

"After the game, there was pride in my players' eyes," Ataman said. "They said to me, 'Coach, the atmosphere was not fair to you. And yet we still won.' We overcame all the negative conditions; we did it by holding our heads high. We represented Turkey in the best possible way as a team. I'm sure fellow Turkish citizens are proud of us. When they come to Turkey, we must take the same safety measures. It won't be difficult for us to reach to the quarter finals."

He also highlighted, "Our goal tonight was not only to win the game but to show our sportsmanship. It was such a hard game for us because we were loaded and the atmosphere before the game was tense. But we played our best game this season so far. We failed to defend Marjanovic, but we managed to limit Mitrovic and Williams. In the second half, we concentrated on the game and played much more aggressively on offense. Crvena Zvezda is a young and talented team and I see their players suffer because of the loss."

Galatasaray are now 2-1 in Group E, sitting fourth place behind Maccabi Electra Tel Avivi, Panathinaikos Athens and Real Madrid, who are just one of three teams unbeaten in the Top 16 stage. Next week Galatasaray will host Alba Berlin.