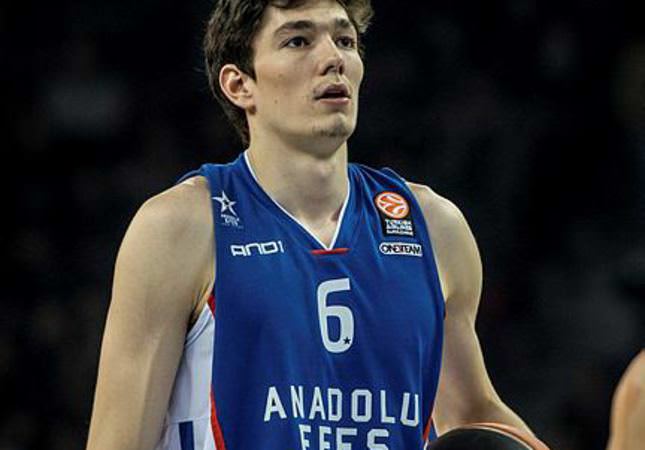 by Kenny Laurie Jan 23, 2015 12:00 am
Anadolu Efes star Cedi Osman believes a win tonight against Nizhny Novgorod would be a "big step" forward for the team in terms of qualifying for the Top 16. The Russians are familiar opponents for the Istanbul side, with both teams playing each other twice in the group stage of this year's EuroLeague. The team sides split the two games, with Novgorod winning in Russia while Anadolu Efes picked up a win in Istanbul. Tonight, Efes travel to Russia in the hope of returning with a much-needed win. "It will be a tough game," said Osman, one of the top young players in Europe. "As we know, in the regular season we were in the same group and met twice. We have won in Russia and have lost in Istanbul. So, we absolutely must concentrate on the task. By winning we can take a big step forward and gain morale before the Olympiakos game." Anadolu Efes were defeated in the last round of fixtures, going down in a close battle with the so-far undefeated CSKA Moscow.

The Istanbul side pushed the Russians all the way, but the extra experience of CSKA Moscow and a few refereeing decisions led to a late collapse. This week, they will be looking for more quality late on and perhaps a spring in the step of Dario Saric, who won the European Young Player of the Year Award for the second year running. Novgorod currently sport a 1-2 record, the opposite of Efes, with their last two defeats being inflicted by Laboral and Turkish side Fenerbahçe. Although Novgorod were something of a surprise package in the first round of the competition, Anadolu Efes coach Dusan Ivkovic is well aware of their threat now. "We expect a very difficult game," Ivkovic said. "It is very important game for both teams. They have been the biggest surprise team in the EuroLeague this season. We qualified from the same group in the regular season and we have already played two games. In the first game, Tarence Kinsey was injured and Taylor Rochestie was out during the second game in Istanbul. It will be a very tough game and a good game, and we expect to play good basketball; we want to win the game."