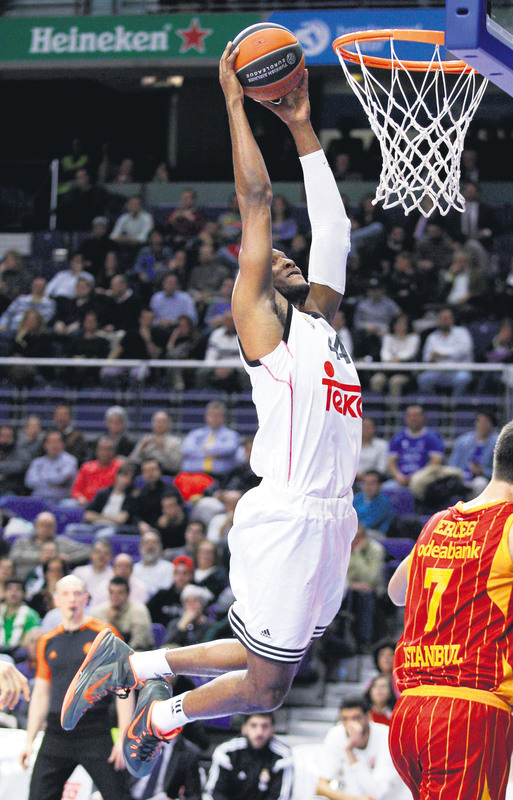 by Daily Sabah Mar 09, 2015 12:00 am
Galatasaray Coach Ergin Ataman waved goodbye to their dreams of qualifying for the next round of the EuroLeague, as they went down 107-71 to Real Madrid in an almost embarrassingly one-sided game. Sitting at the bottom of Group E with a 2-7 record, Gala are all but out of the Top 16 and have gone down in the limpest way possible after picking up their sixth straight defeat. Although the blow-out scoreline could be credited to Real Madrid and their 18 3-pointers made, Top 16 record, the fate of the game rested more heavily on Galatasaray's woeful inadequacy, especially defensively where they gifted open 3-pointers and open dunks. Real Madrid, on the other hand, sit nice and pretty at the top of the group, two games ahead of second place with an 8-1 record. The defeat is an apt representation of Gala's Top 16 campaign up to this point; a decent start before an almost comic unraveling. Back in Week 3, Gala had gone to Belgrade and braved a top team in a white-hot atmosphere. After the game, their gaff-prone coach boldly stated that qualification to the next round "wouldn't be difficult." The coach would come to regret those badly-chosen words. Since then, things have lurched from the inept to the farcical.

Gala lost key players like Carlos Arroyo and Furkan Aldemir due to the club's inability to pay their wages, in the same season that Ish Smith walked out after a bust up with Ataman. Their coach again made headlines when he physically abused one of his players before backing it up in public, believing it to be his right. On Friday, they did enjoy a creditable start considering the gulf in talent and the fact that Arroyo - their leader and best player - walked out of the club just days ago. Gala finished the first quarter just four points back at 24-20, but when your best quarter involves a two-possession deficit, it usually means a blow out is on the way. From there, the Yellow-Reds disintegrated, losing the second quarter 33-14 to go into the half at 57-34 with Galatasaray unable to control the Real Madrid juggernaut. A creditable third quarter saw them claw five points back before Real Madrid regained their stranglehold with a 30-12 final quarter to finish the game with a blowout 107-71 scoreline. "Actually, we were good in the first quarter," Ataman said. "We played our basketball, but we could not make the shots. We have a narrow rotation and we got tired. However, they played quick basketball. It's hard to play against Real Madrid. To be honest, we have lost our chance to qualify for the playoffs." Patric Young was the standout player for Gala with 19 points and eight rebounds, while Real Madrid had seven players in double figures. Rudy Fernandez had a team-high 17 points, hitting five of his seven 3-point attempts. Elsewhere, Anadolu Efes suffered a heart-breaking loss against Unicaja Malaga, going down 93-90 thanks to a buzzer-beating 3-pointer from Ryan Toolson. Thomas Heurtel had looked to have earned overtime after hitting a clutch 3 with five seconds on the clock but Toolson tough pull-up jumper sealed Malaga's second win of the Top 16 while Efes slump to a 4-5 record.
Last Update: Mar 09, 2015 1:13 am
RELATED TOPICS